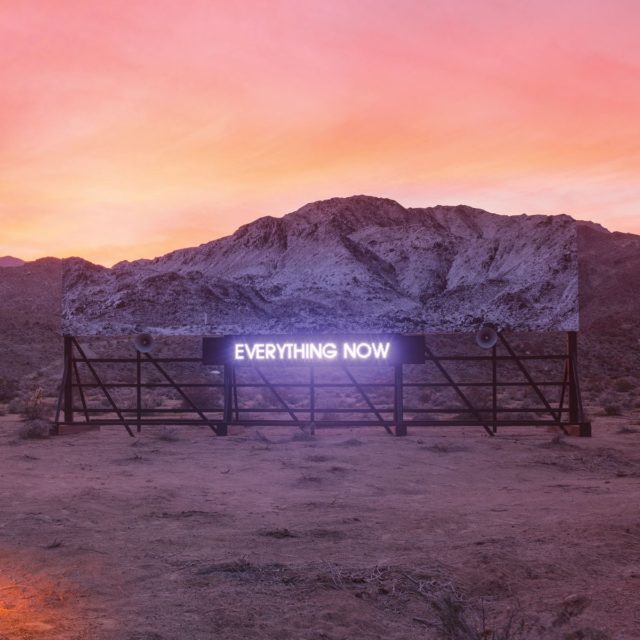 When it comes at making a statement, few modern bands are quite at doing so as adept as Arcade Fire. With the release of its newest album, the band has once again found itself treading the thin line between performance art and theatrics. Unfortunately, on Everything Now, Arcade Fire has done away with the lush, orchestral soundscapes fans have come to love and replaced them with cheap-sounding two-chord progressions. Ironically, this is fitting for an album so devoid of soul.

The Montreal-based indie rockers first burst onto the scene in 2004 with the critically acclaimed Funeral, an album which famously garnered the attention of music legend David Bowie. In its 16 years, the group has managed to put out some of indie rock’s most intelligent and daring offerings. Every album since Funeral has followed suit, with the exception of the new black sheep of Arcade Fire’s discography, Everything Now.

Usually self-indulgently dramatic, Arcade Fire’s redemption was always found in its self-awareness. In the past, the band has tackled the woes of the human condition with pointed criticisms of religion, government, society, and technology — all wrapped up with a wonderfully nihilistic sense of humor. While it explores such looming topics with a staunch seriousness, the band usually manages to avoid falling into the pit of hipster-catering intellectualism.

Still, much of the enjoyment in listening to its previous albums was peeling back the layers and sharing the feeling of being “in” on the joke. However, this time around, the listener is not given much of anything to decode or delight in.

The title track, “Everything Now,” is perhaps the only place on the album where the listener can find any ounce of life. Vocalist Win Butler’s humorous rage in lyrics like “every room in my house is filled with shit I couldn’t live without,” set to a cheesy ‘80s tune reminiscent of “Dancing Queen,” culminate in a snarky ode to rampant consumerism that isn’t too preachy.

Unfortunately, this is not the case with the rest of the album. Despite being about the state of life in the age of technology, Everything Now is impressively out of touch.

If there is an attitude, it is an uninspired one which claims that we millennials are too obsessed with consumerism, social media, and ourselves. Cue the groans and eyerolls. While Arcade Fire does sprinkle some “truths” throughout the album, they do so in a bland, joyless way.

“Creature Comfort” is particularly guilty of this. The tune is simple and upbeat with lyrics that follow a similarly linear path. Lines like, “Some boys hate themselves/Spend their lives resenting their fathers/Some girls hate their bodies/Stand in the mirror and wait for the feedback” tell the story of teenagers battling unrealistic expectations and suicidal thoughts in a particularly unimaginative way. The repetition of format (“some girls/boys cut/starve/hate themselves”) makes for a song that is difficult to listen to due to its simplicity and lack of real substance.

The uncomfortable feeling left in the listener’s gut after listening to “Creature Comfort” only builds as Arcade Fire progresses to the even more baffling “Peter Pan.” As a typical anti-suicide PSA turns into typical love song, Everything Now begins its descent into becoming an infinite shit show.

The most disorienting part of “Peter Pan” is that it doesn’t speak the language of an Arcade Fire tune. Undying, eternal love isn’t exactly common fodder for the act, and I can’t think of one other song in which Butler sings a line remotely close to, “Be my Wendy/ I’ll be your Peter Pan/Come on baby, take my hand.”

Herein lies the most glaring problem with Everything Now: the band’s intentions are ambiguous and more than likely lost on listeners. Arcade Fire seems to be trying to make a statement about consumerism as a force in our lives, but Everything Now fails to give any insight or glimpse of imagination.

The sense of exploration one typically feels with an Arcade Fire album is nowhere to be found, resulting in a one-dimensional disappointment that fails to make much of an impact on the listener, emotionally or otherwise.