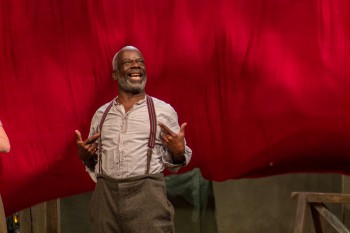 For an all-too-short two performance run, the Globe Theatre Company graced our modest Campbell Hall with a production of Shakespeare’s King Lear. Bill Buckhurst, the director of the piece who often works for the Globe, envisioned a production in which the audience felt they were viewing a troupe of actors putting on a play in a comfortable viewing experience akin to that of the original production in the Globe Theatre in London. This vision led to the incorporation of instruments within the piece played by the actors themselves, the mingling between the actors and the audience before the performance, and many other unique directing choices throughout.

Perhaps it was that Alex Mugnaioni (who primarily played Edgar), came and flirted with me before curtain call, or the introduction from the company at the beginning that welcomed us as an audience to the stage, that prevented me from first immersing myself within the action of the piece. However, once finally settled in, the production was innovative, incredibly gripping, and very well performed.

Facing a seemingly insurmountable challenge of having only eight actors, these skilled players were forced to devise a method of portraying the 16 key roles, as well as many other ensemble parts. Therefore, all but two performers were assigned double-, and in some cases, triple-roles through the use of minor costume changes. Despite the novelty of this, I can imagine that this stylistic choice could have been incredibly confusing to an audience member unfamiliar with the play. Another potentially confusing directing decision was Buckhurst’s choice to have the actors that were appearing in a following scene wait on stage during the previous one. To see a character who is currently being discussed on stage witness this interaction, only to later appear and seem unaware of what has occurred while he was “off stage” simply did not work.

That being said, the production had many strengths and to an audience familiar with the play, and was brilliantly produced. The acting was phenomenal, especially taking into account the challenge of playing so many different roles in one production. The musical transitions between scenes were effective as the simplest integration of an accordion or a drum could elevate the action and change the tone of the scene without all the elaborate incorporation of an entire band backstage.

On the topic of music, the curtain call felt wildly inappropriate as the actors got back up to end the show in an out-of-place song and dance number. After a heartfelt and incredibly moving death scene betwixt Lear and Cordelia, this ending felt out of place and off putting. As the tears dried on my cheeks, I felt annoyed that the beautiful death scene was so quickly interrupted by a moment like this.

On the whole, though I didn’t necessarily believe the production deserved the standing ovation it received, I was quite satisfied with my three hours in Campbell Hall, and really admired the work of each of the actors. The actors’ performances were brilliant and this rustic approach to a well-known play proved refreshing. The University of California, Santa Barbara Arts & Lectures Series provided a wonderful opportunity for UCSB students and Santa Barbara locals to be able to experience this inspired production from the Globe Theatre Company from London on our very own campus.