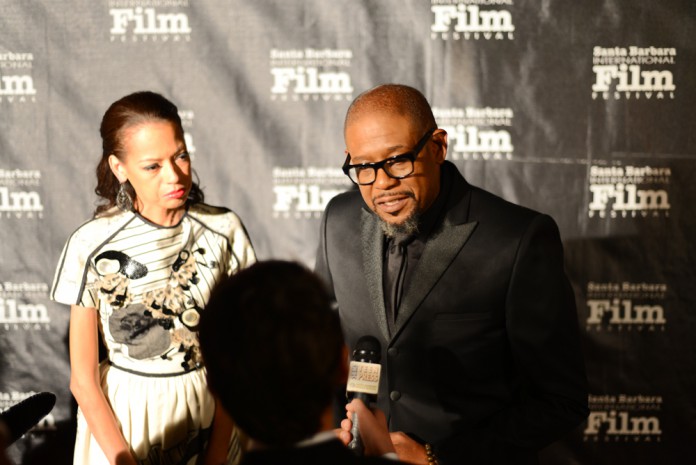 The Santa Barbara International Film Festival opened its event on Sunday, Jan. 5, by awarding Forest Whitaker the prestigious Kirk Douglas Award for Excellence in Film. This last fundraising effort for the festival was held at the beautiful Bacara Resort & Spa located mere miles from our campus, with tables at the dinner costing upwards of $25,000. But despite the hefty price tag, the black-tie donned crowd was in for a brilliant show featuring great actors and a well-deserved honoree.

The universally beloved and extremely versatile Forest Whitaker has been called one of the “greatest actors of our generation” by both critics and fellow thespians. Oscar-nominated actress Angela Bassett, who was a special guest of the event and a presenter of the award, called Whitaker “a great actor, consummate professional, and a better friend.” She also stated how she was thrilled to work with him on the recent “Black Nativity,” calling it a “complete and utter joy.” Another special guest, actor Michael B. Jordan, was equally effusive of Whitaker, saying he was “honored” to just be given the opportunity to present Whitaker with the award.

Whitaker himself said he was “honored and humbled” to receive this “tremendous award.” He joins an elite company of past award recipients, which include Robert De Niro, Michael Douglas, Harrison Ford, Quentin Tarantino, Ed Harris, John Travolta, and Kirk Douglas himself. But even among these legends, Whitaker’s talents shine through, and his place in this outstanding list is well deserved.

Whitaker, who won the Academy Award for Best Actor in 2007 for “The Last King of Scotland,” is a contender again this year for his performance in “Lee Daniel’s: The Butler.” He has also appeared in “Platoon,” “Ghost Dog,” and “The Crying Game.” Whitaker has also contributed to the film community as a director and producer. His most recent work, outside of “The Butler,” has been serving as executive producer for the emotional and biting independent film “Fruitvale Station,” which features the aforementioned Jordan. Jordan, who will receive the SBIFF Virtuosos Award on February 4, owes much of his success to Whitaker.

“I really owe him a lot,” said Jordan. “He supported this small film, and it turned into the little engine that could.”

But the award was as much for his humanitarian efforts as his theatrical ones. Whitaker is the founder of PeaceEarth Foundation, the co-founder and chair of the International Institute for Peace, and a UNESCO Goodwill Ambassador for Peace and Reconciliation.

“Forest Whitaker is an exceptional man and actor,” commented award namesake Kirk Douglas. “His commitment to human causes, his passion for what is right, and his dedication to his craft are inspirational and at my age, inspiration is rare.”

This beautiful event was the prelude to the 29th Annual Santa Barbara International Film Festival, which has recently become one of the most prestigious in the country, and serves as an early Oscar barometer. Running from Jan. 30 to Feb. 9, the Film Festival has a diverse lineup of brilliant films, and more awards that will honor such visionaries as Cate Blanchett, Robert Redford, Martin Scorsese, Leonardo DiCaprio, and many others. This festival is one of the crowning jewels of our local community, and should definitely be experienced firsthand.