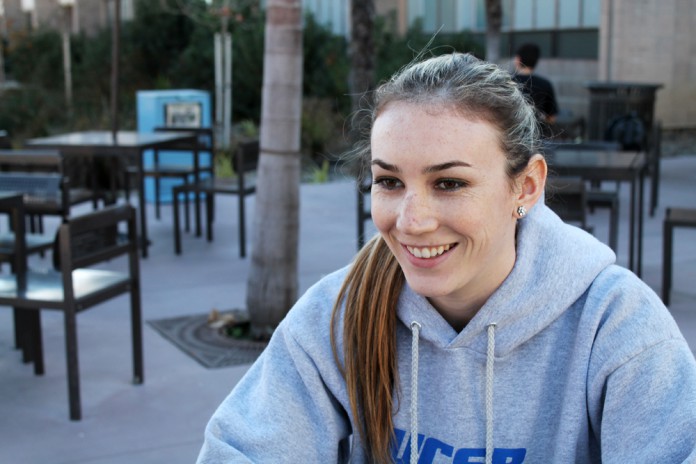 The cheerleaders separate into four evenly spaced clusters, each composed of four girls facing inward and surrounding a fifth, who is hidden from view. That is until, perfectly timed to create a ripple effect across the gym floor beginning with the leftmost cluster, each center girl is propelled into the air, where she performs a backwards rotation and then safely lands in the arms of her respective group of four.

Watching this impressive feat executed by the University of California, Santa Barbara Cheerleading team on a YouTube video of their 2013 King of the Bleachers competition routine, for which they were awarded the Grand Champions title, I was rather ignorantly reminded of the graceful synchronization of dolphins; a glossary of cheerleading terms just a Google search away told me that these were actually a series of back tuck basket tosses. Though a highly demanding stunt, the back tuck basket toss was just one of many moves of its caliber incorporated into the performance. I mean, our cheer team is good—undefeated in the year 2013. So why don’t most UCSB students even know that it exists?

Fourth-year Ashlyn Kokes might be able to shed some light on this. Going on her fourth year as a UCSB cheerleader, Kokes is one of the two most senior members on the team. As I took the seat across from her at our table by the Arbor, her dedication to her sport became immediately apparent; along with her UCSB Cheerleading sweatshirt, she sported a golden bow on her blue UCSB Cheerleading backpack.

“For identification,” she told me, because all the cheerleaders have the same kind of backpack. The distinctively cheer-related golden marker appeared to me an emblem of pride as well.

A relatively new athletic organization, the UCSB Cheer team has been around for less than 10 years and is entirely self-sufficient. The two captains, currently juniors Kana Horie and Clarissa Contreras, are voted into their positions each year. They provide internal leadership, bearing all the usual responsibilities of a coach, such as training, scheduling, and tryouts. While the team does hire a choreographer to orchestrate the routines, this is paid for out of its members’ own pockets—as are the rest of their expenses, including their elaborate uniforms and transportation to the competitions, which can be as far away as Nationals in Las Vegas.

To make ends meet, the team hosts numerous bake sales—look out for one sometime this quarter in front of the Student Resource Building—and profits from selling tank tops. Still, so far, they have received little funding from the school athletic department.

“I’ve spent thousands of dollars on cheer at UCSB over the years,” Kokes admitted.

Money, however, is far from the only resource that these girls invest in their sport. Cheerleading, like any athletic activity, requires copious amounts of time and energy, which is why the team holds tri-weekly practices during the winter quarter to prepare for basketball games on Thursdays and Saturdays, as well as the three or four competitions they participate in per quarter. For practice, they book the gymnastics space at the Rob Gym, which includes a spring floor that was recently renovated—a big improvement, according to Ashlyn, since the previously shoddy floor had caused serious injuries to cheerleaders in the past.

Risk of bodily harm is another sacrifice that the girls make for their team; one member, Arriana Rabago, broke her wrist during a competition performance but completed the routine nonetheless. Kokes herself suffers from chronic wrist problems, and once competed with a thoroughly wrapped and braced hyperextended knee, which in non-competition hours had mandated the use of crutches and extensive physical therapy.

And yet, participating in UCSB Cheer has been more than worth the pain and cost for Kokes, who spoke for all of her team members when she told me how rewarding belonging to a group of equally dedicated and passionate athletes can be, despite the marginalization of their team in the hierarchy of school sports. Fortunately, they have been steadily moving toward the UCSB athletic mainstream—recently, the school rewarded them with Nike Pros, and they hope there is more recognition to come.

For those of you who were pleasantly surprised to learn that UCSB has a cheer squad and are interested in joining, tryouts are held every Memorial Day weekend in May. Otherwise, keep an eye out for their upcoming halftime performance at the men’s home basketball game versus Cal State Northridge on Feb. 15 at 4 p.m. Prepare to be amazed—despite their low profile, these girls mean business.