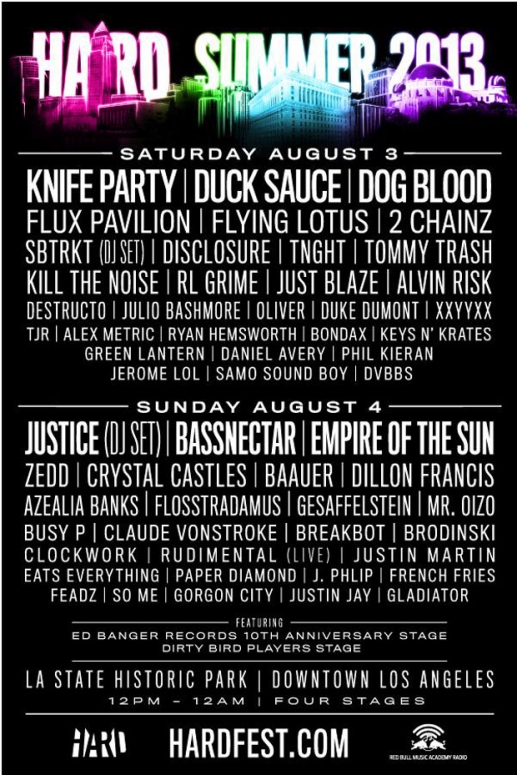 August is just around the corner, and that means the 6th annual electronic music festival HARD Summer is too. With twice as many artists as last year, HARD Summer will take place on Aug. 3 and Aug. 4 at the Los Angeles State Historic Park in downtown L.A. Although tickets are sold out for both Saturday and Sunday, The Bottom Line has been confirmed two press passes. Photographer Ayeyi Aboagye and I will bring the party back to Santa Barbara as we attempt to break a sweat with artists such as Justice, Empire of the Sun, Disclosure, RL Grime, Crystal Castles, Azealia Banks, Flosstradamus, XXYYXX, Tommy Trash, Ryan Hemsworth, and Knife Party. HARD Summer 2013 is also celebrating the 10th anniversary of Ed Banger Records by featuring a Busy P and Ed Banger mix on Sunday night.

When thinking about electronic music, hip-hop, R&B, and rap are not usually associated with it, but as both electronic music and hip-hop have used synthesizers, programmable drum machines, and mixers early on in the game, this relationship is not unexpected. Hip-hop, R&B, and rap are also the roots of much electronic music today, as seen in trap, drum and bass, dub-step, moombahton, and glitch-hop, where the song itself is remixed or the beats and words sampled. HARD events have had hip-hop artists 2 Live Crew, Theophilus London, Danny Brown, and others headline. This year, 2 Chainz and Azealia Banks will provide the booty-popping claps, heavy bass lines, and rap at HARD Summer, alongside hip-hop influenced artists like RL Grime, Baauer, Flosstradamus, and Flying Lotus, among others.

Many artists that performed at past HARD Summer events will return, from the small print to the large, such as Knife Party, Alex Metric, Duck Sauce, Destructo, Dillon Francis, Claude VanStroke, Gesaffelstein, Skrillex (returning with Dog Blood), Kill the Noise, Alvin Risk, and Breakbot, continuing their growth or legacy in the world of electronic music.

Stay tuned for the inside scoop with The Bottom Line as Deanna Kim and Ayeyi Aboagye go hard at HARD Summer.

Photos Courtesy of Spin and Hardfest.com