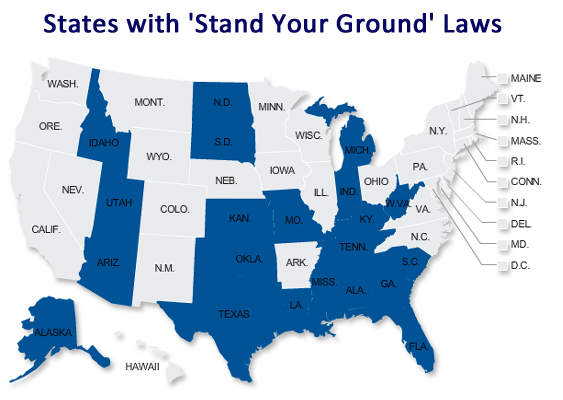 In the aftermath of the George Zimmerman trial, America has exploded in regard to Florida’s draconian gun laws, notably the controversial “Stand Your Ground” self-defense law. It states that if a person perceives a real and imminent threat, they have the right to “fight force with force.”

Now, the facts of the Zimmerman case are much disputed, and only two people know the truth of what happened that night: Zimmerman, who won’t tell, and Trayvon Martin, who can’t. Yet, for the purposes of assessing the law, it doesn’t actually matter whether or not Martin attacked Zimmerman, or whether or not the threat that Zimmerman claims he perceived was all in his head. It doesn’t matter if Martin had a history of violence.

According to HLN, the SYG law permits deadly force if: 1) You are not engaged in any unlawful activity, 2) You are being attacked in a place you have the right to be, and 3) You reasonably believe that your life is in danger as a result of another person’s overt actions towards you. By these criteria, Zimmerman should have had protection under SYG, I concede. But the question is: why was he ever in a situation to perceive such a danger?

The reason for that is the way the law is worded: a person “has no duty to retreat and has the right to stand his/her ground and meet force with force.” This is an issue because it doesn’t say anywhere in the law that the perpetrator of said crime or self-defense, has to prove that they tried to solve the problem without violence first. They could technically go straight from seeing a shadow to pulling out their gun and pretending they’re Dirty Harry. That wouldn’t hold up in court, but the law is vague about the circumstances that are considered “dangerous” or what constitutes a “threat.”

So Zimmerman is in his car, totally safe from everything, and spots a suspicious hooded figure. He calls 911 to report a possible burglary; the 911 operator asks for his whereabouts, and for Zimmerman to stay on the phone and keep giving the operator updates on the location of the figure. Eventually the figure moves out of Zimmerman’s line of sight, so the operator thanks him for doing all he can. Yet, Zimmerman gets out of the car. The operator asks him if he was following Martin, Zimmerman says yes, and the operator says, “Okay, we don’t need you to do that.” Despite the operator’s advice, Zimmerman follows Martin, and they have some sort of a confrontation. All of a sudden, Zimmerman has fired his gun and the kid is dead on the ground with only a can of tea and a bag of Skittles.

It may be true that Trayvon Martin attacked Zimmerman. But I would go so far as to say that it was warranted. After all, it was dark, it was raining, a 17-year-old kid was walking down the street alone after going to the store to buy some snacks, and he sees a guy 11 years his senior following him. It probably scared him, he probably turned around to ask why the guy was following him, the confrontation escalated, Martin attacked to defend himself from his own perceived threat, and Zimmerman had to counter-defend himself. However, Martin was a teenager. He was probably filled with bravado and also fear that someone was following him, and it led to him picking a fight instead of running. But who really knows?

No evidence shows that Martin attacked Zimmerman in his car, or that Martin would have ever come across Zimmerman had Zimmerman not sought him out. Zimmerman no doubt felt empowered by his firearm and sought out trouble. But the blame also lies with this incredibly flawed law that not only permits, but borderline encourages, violence in the name of self-defense. Perhaps Zimmerman never would have chased after the boy if he knew that there was no way that he would get out of shooting an unarmed minor. He felt secure in his rights, his right to seek out trouble, because the world is his oyster, and he is simply defending it.

This law was created by Rep. Dennis Baxley (R-Fla.) who said that if you stand your ground in Florida, you will not be prosecuted. He claimed that it would help protect tourists from people breaking in to their hotels and cars. The law states that he “has no duty to retreat and has the right to stand his/her ground and meet force with force.” This creates a vigilante mindset — it doesn’t define the danger; anyone can claim danger if they are simply trigger happy fools with a firearm. It mixes up the right to use force with the obligation to use it.

The worst part of the law is that it isn’t even applied universally across the ground. It’s already a dangerous law in itself, but it didn’t apply to Marissa Alexander, a woman who was battered by her husband. She one day grabbed a gun and shot it into the ceiling as a “warning shot” in an attempt to prevent another attack. Nobody died. Nobody was even remotely injured. She was sentenced to 20 years in jail, despite invoking SYG during her trial as a defense. Accusations have been thrown about: she’s a woman, she’s black, she’s a black woman. No matter what’s true, she did not receive the same treatment that Zimmerman did, and he produced a body.

Interestingly enough, this is not the only such law in the country. According to Slate and HLN, 20 other states in the U.S. (including California) have laws like SYG, and even more have a milder version of the law called the “Castle doctrine,” which essentially means that you have the right to violently defend yourself in your own house. But the Castle doctrine makes sense. Someone breaks into your home and is going to attack you and your family, you should react if you can’t reach a phone fast enough to call the cops. It was an unsought attack. But SYG makes less sense. It should not assume that the world is your castle. The Castle doctrine is reasonable. SYG just creates a mindset that encourages violence, and promotes the seeking out of danger because of the knowledge that you have rights to stand your ground.

Despite all the gaping holes in the logic of this law, Florida Gov. Rick Scott has, according to NPR, declined to make a move to change the law. Multiple lawmakers, Baxley included, have claimed that any changes to the law would be an act of gun control, something that should be protected against in the second amendment. However, Sen. John McCain did release a statement, according to the Atlantic Wire, that he believes the SYG law should be changed, or at the least, reviewed by Florida legislature.

If there can be some bipartisan agreement on, at the minimum, universal application of SYG (or even better, an actual change to the law), perhaps there could be some positive change. To be clear, self-defense is something worth protecting, but not at the expense of people, such as Alexander, who are truly defending themselves and are punished for it. The issues with this law are not simply because of Zimmerman and the outcome of this trial. It is the poor writing, poorer execution, and lack of a universal application that make SYG so dangerous.

Updated to include quote from 911 transcript.