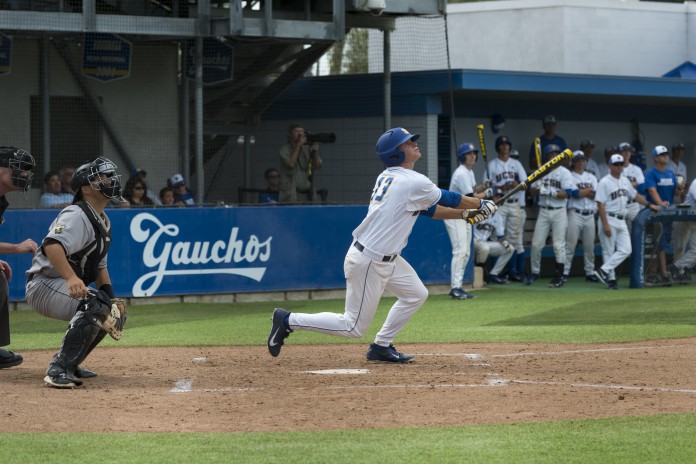 On Friday, April 5, The University of California, Santa Barbara’s baseball team faced off against California Polytechnic State University in the first of a three game series at Caesar Uyesaka Stadium. The Gauchos served the Mustangs their first conference loss as they defeated the 21 ranked Mustangs 4-2 in a flurry of offensive firepower as the team racked up 12 hits. The win puts the Gauchos at 15-13 overall and 2-2 in the Big West Conference. The Mustangs fall to 20-7 overall and 3-1 in the Big West Conference.

The Gauchos displayed a well balanced offensive attack. Every starter made it on base at least once in the game and many of them in the form of singles. The offensive standouts for the Gauchos were second-year first baseman Tyler Kuresa, who went three for four with an RBI, first-year third baseman Ryan Clark, who batted two for four, and third-year shortstop Brandon Trinkwon, who went three for three with a walk.

The Gauchos had their ace second-year Austin Pettibone on the mound up against the Mustangs’ starter, fourth-year Joey Wagman. Pettibone won the battle and pitched a gem of a night. He only allowed the potent Mustangs offense two runs and six hits in the eight innings pitched. Pettibone’s only real blemish of the night came in the fourth inning, when third-year Mustang David Armendariz hit a solo homerun which proved to be the only homerun for both teams in the game.

Trinkwon elaborated on the team victory, saying, “It feels great to get the win, especially against your arch rivals. It’s a big win for us. I felt good at the plate. I’m just glad I helped my team any way I could and Austin [Pettibone] had a gutsy performance. He came and hit his spots great. He trusted his defense. That’s the main point. Not walking many guys and just allowing us to play defense. Clark played great at third base. It’s a big time job, especially as a freshman. Pettibone trusted us and we came out with the win. It feels great to win Friday, but the goal is to win the series and league, so we got to come out and win one of the next two, if not both, or we are not going to be a content. ”