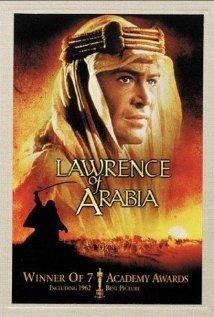 The University of California, Santa Barbara’s Pollock Theater had a full house of younger and older moviegoers to watch the fully-restored “Lawrence of Arabia” on Feb. 26. The film, directed by David Lean and first screened in 1962, was restored in 4k in 2012 by Sony Pictures Entertainment for its 50th anniversary. As part of the Carsey-Wolf Center’s film series, “The Future of the Past: The Art and Philosophy of Film Preservation,” the restored and critically acclaimed “Lawrence of Arabia” made its debut with guest speaker Grover Crisp, Sony’s executive vice president for asset management and film restoration.

“It’s great they’ve done this for us to see [the film] again,” said 73-year-old Dick Falt, “and it’s even better than the first time.”

“Lawrence of Arabia” is based on T.E. Lawrence’s journeys and experiences in Arabia during World War I. Although long, the movie’s directing and cinematography boldly and beautifully depict Lawrence’s struggles and feats with himself and the war.

The scene opens with Lawrence speeding on his motorcycle to, ultimately, his death. His accidental death is far from extraordinary—he dodged hitting cyclists with his motorcycle—and sets up the movie’s theme of irony, controversy, and Lawrence’s overdramatic entrances and exits. Following his funeral, the epic journey of Lawrence begins to unfold as the scenes take us back to Cairo in 1917.

The film is engaging yet frustrating. Lawrence’s character flips from being egotistical, a narcissist, and oblivious to being humble, remorseful, and considerate. Watching anyone become conceited and consumed with his or her own presence is annoying but comically entertaining, as was the depiction of Lawrence, which is historically argued to be a false portrayal. Although Lawrence’s charming conceit and inflated ego become his downfall at times, they also help him to unite two rival Arab factions, make guerrilla attacks, and gain military advances. Lawrence is self-absorbed and daring, and seems to struggle with his identities of wanting glory and power and wanting justice and compassion. Throughout the film, Lawrence switches interchangeably from his sane self to his alter ego.

Although the British epic film is controversial in historical accuracy and content, the cinematography captures the beauty of the desert and the brutal, yet heroic aspects of war. The artistically directed shots of the rising sun bleeding vivid colors over the desert, the seemingly endless mountains of sand in the Nefud desert, and the fleeting battle scenes on horseback are visually breathtaking. The art and science of this motion picture photography by Freddie Young was done so with Super Panavision 70, and won the 35th Academy Awards and 20th Golden Globe Awards for Best Cinematography, among many other awards and honors. Super Panavision 70 is a wide film gauge of 70 or 65 mm film format, compared to standard 35 mm film format, and allows for high-resolution still and motion picture photography, used more commonly between 1959 and 1983.

These marvelous shots were able to remain exquisite with the restoration of the film. The film was first reconstructed in 1988, but this restoration process is seen as a “director’s cut” as it was a project where a team and Lean systematically put together and tweaked scenes. During this process, the film went through “wetgate printing,” where the print is treated with a special solution, but still contained color defects because of the deterioration of the original negatives.

“We wanted to go through and fix all the problems that they couldn’t fix back then simply because the technology didn’t exist. It just couldn’t be done,” said Crisp at the showing. “What we wanted to do was fix things that were wrong and let the film be what it is… we didn’t want to denature the image in any way because it’s such a beautifully shot and directed film.”

Before and after images of legendary war scenes, among others, were shown; cracks, tears, and scratches are evident in the actual frames. Crisp explained that he and his technical crew spent three months in 2009 looking at all 320,000 frames one at a time. 2009 was a photo chemical situation for the film as the crew made protective material and fixes. To fix those damages, tears, and scratches, each frame is divided into four sections and different people are assigned different sections. This took months of works in the U.S. and other countries, a process described as “punishing” by Crisp.

By the beginning of 2010, the Sony crew began scanning the film, a process that takes 12 seconds per frame to scan the negatives at bright and high resolution. The machine used replicates the pixels digitally at 4,000 pixels per horizontal line, so “Lawrence of Arabia” has approximately 8.8 million pixels per frame, which are four times the 2.2 million pixels per frame of Blu-Ray Discs or High Definition broadcasts. Just to scan the entire 228 minutes of this film, it took six months.

After the film was finally scanned, Crisp said that it was moved to their digital facilities called Colorworks, where they spent the next year going scene by scene to get the color correct while repairing damages.

The strenuous and meticulous process of converting the damaged film negatives to 4k have given justification and fortified the title “Lawrence of Arabia” as an award-winning movie. “Lawrence of Arabia” will continue to be enjoyed, if not for its storyline, then for its visually stunning cinematography and pixelation.

Photo courtesy of the Carsey-Wolf Center