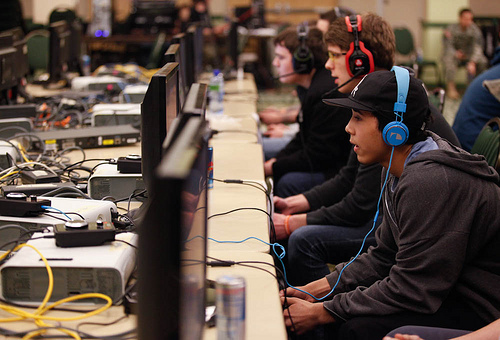 League of Legends is an online multiplayer game (or MMO, short for massively multiplayer online game) developed by Riot Games that enjoys widespread popularity thanks, in part, to the fact that it is free to play—a popularity that extends even to the University of California, Santa Barbara campus.

“I mean, all things considered, I’m fairly certain that League of Legends is the most popularly played MMO on campus, at least that I’ve seen,” said Grant Apodaca, second-year computer science major and vice president of San Rafael’s Hall Council.

He was originally planning to throw a small League of Legends tournament as one of his requisite hall programs.

“I myself don’t play,” said Apodaca, but the interest of several close friends who loved the game were enough of an indication that they would be able to fill a small tournament bracket. He added that he hoped that it might attract some of the students that weren’t normally as apt to turn out for hall social events.

Apodaca recruited the help of friends Paul Hanson, a second-year political science major, and Tyler Ainsworth, another second-year, to help him recruit people to join and organize the teams for the tournament. Both Hanson and Apodaca noted that they weren’t expecting more than 30 to 40 people, but after they had over 30 sign ups in the first week, they decided to open it up to more people to accommodate the unexpected level of interest. The group managed to secure more funding for the program and they continued to sign people up for the tournament. By the day of the tournament, over 110 people had signed up, with even more showing up on the Saturday of the event to spectate.

The tournament itself had a few hiccups—mostly as a result of the strain the number of simultaneous connections seemed to put on the residence halls’ WiFi connection. Apodaca, however, already has some fixes in mind that will help the next League tournament run more smoothly. ResNet issues aside, most people who attended the event seemed to consider it a success, even just in that it was an opportunity to bring together a group of people with a common interested.

“People who play videogames tend to sit in their rooms—we really wanted to bring the League community together…You’re not just looking at a username, you can actually associate the name with face,” said Hanson. “I guess my favorite thing about the League community is that everyone that plays the game genuinely likes the game at its core. You all have a common interested instantaneously. When you actually meet the people, they’re all nice people.”

Despite the technical difficulties, the event was successful and generated enough interest to give rise to the idea of forming a League of Legends club on campus.

“I’m already involved in various school organizations, including Greek life,” said Andrew Lee, a second-year computer science major, of his involvement. “I thought that it is just nice to have another organized group on campus where people of similar interest can meet each other. Not only does this increase the amount of networking one can have in the future, but also it’s meant for people to enjoy themselves.”

The group is currently in the process of finalizing the formation of their club with Student Life, with meetings tentatively scheduled to be on Fridays. They plan to host both casual and competitive tournaments in the future. Updates can be found on the UCSB League of Legends Facebook group at https://www.facebook.com/groups/298881233478916/ .