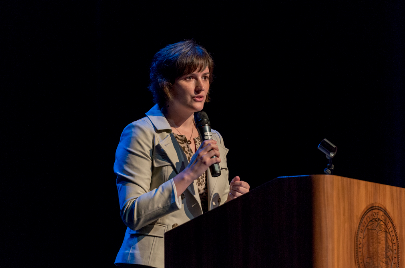 Attorney and women’s rights activist Sandra Fluke spoke to an intimate group of students, members of Planned Parenthood, and the Santa Barbara Women’s Political Committee at University of California, Santa Barbara’s Campbell Hall on Feb. 28. Fluke became a political celebrity in a year ago when, after not being allowed to testify to the House about the need for insurance companies to cover birth control, conservative talk-show host Rush Limbaugh accused Fluke of being a “slut” and a “prostitute.” Since then, she has appeared on CNN, MSNBC, NBC, and other media outlets to further promote women’s rights and other issues concerning women and the young population.

On Thursday night, rather than discuss her own personal life, Fluke chose to educate the audience about legislation being worked through Congress and the Senate, and the successes of some items like the Violence Against Women Act, which passed in the House the same day she gave her speech to UCSB students. Fluke said it’s important to keep in mind that women must be a part of discussions not under the cliche “women’s issues” label.

“Everything our government works on,” said Fluke, “affects women, and frequently, when we section out what is exclusively women’s agenda, we forget to include what a big impact it has on so many impoverished women when we cut all these different types of government services. So the sequester has got to be a woman’s issue.”

California State Senator Hannah-Beth Jackson spoke before Fluke and offered her own political perspective on women’s issues and how they are being addressed in the political environment.

“We have to be vigilant,” said Jackson. “We have to realize that we are only 4 percent of the women in boardrooms of the major corporations in America. These are where policy is made. These are where issues that are important to us are implemented and if we aren’t there speaking up and if we’re not part of the discussion, or as we say, we don’t have a seat at the table, we are not going to be able to advance our cause.”

Fluke urged her listeners to realize the severe global impact decisions made by the U.S. can have on other people, particularly in regard to its stance on the United Nations resolution “Convention on the Elimination of all forms of Discrimination Against Women” (CEDAW). The Convention, adopted by the UN in 1979, includes 30 articles which define what constitutes discrimination against women and creates an agenda to help stop such discrimination. While countries like Iraq and Kenya have ratified the Convention, the U.S. remains 1 of only 7 who have not.

“It has a big impact on women around the world,” said Fluke. “Afghanistan has ratified the treaty and there was a woman activist testifying before members of their parliament there, and she was saying that you need to comply with your CEDAW obligations and these are the ways in which the country is not complying. One of the male legislatures said, ‘why should we comply with CEDAW? The U.S. has not even ratified it.’ So it matters whether or not we take a stand.”

Fluke touched on multiple policy issues within the U.S. before concluding with a question and answer period. Jane Gray, the President of the Santa Barbara Women’s Political Committee, said Fluke has a strong and clear voice for women’s issues that made her an obvious choice to speak at UCSB.

“She just personifies,” said Gray, “why women are critical in the [political] process and why a woman’s voice is necessary in the dialogue. We found last year that men didn’t want to hear about women’s rights and the fact that we’re still battling for these things…shows we have a long way to go.”

The Director of Public Affairs for Planned Parenthood Gina Fischer handed out condoms and information about the group and said they decided to be a part of the event because of Sandra Fluke’s stand on birth control.