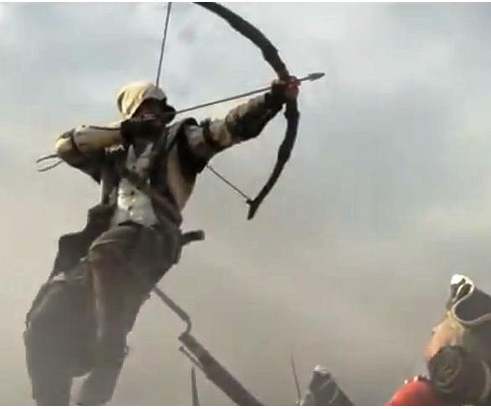 Since its bombastic debut in 2007, the “Assassin’s Creed” series has become one of the biggest names in gaming. Players have been treated to a high concept experience that spans the entire globe and thousands of years of history, taking audiences through the Crusades, the Italian Renaissance and the modern times as a member of a secret order of present-day Assassins set on preventing the end of the world at the hands of the Templars, which have also survived the millennia since the Crusades. After a couple of installments that failed to shift the setting and let a little bit of steam out of the series, the paradigm has shifted to the American Revolution with “Assassin’s Creed 3.” This is one of the most anticipated games of the year, but is it truly as revolutionary as the time period it aims to replicate?

The first aspect of “Assassin’s Creed 3” that requires attention is its story. If you are a fan of the series, you know what to expect: the present-day Desmond Miles must use a machine called the Animus to live out the experiences of his Assassin ancestors, learning more about how to defeat the Templars and the plight of a mysterious First Civilization that has information on how to prevent the cataclysmic event supposedly taking place on that infamous date, Dec. 21, 2012. This time, Desmond hops in the shoes of Connor, a half-Native American Assassin who finds himself caught in the middle of the American Revolution. It may seem like a completely scattershot concept, with just about every sci-fi and video game storytelling trope thrown in the mix, but the series has done such a good job over the years with establishing its mythos that it miraculously manages to not only avoid feeling silly, but also construct a genuinely interesting storyline that players will want to see to the finish. It has somewhat of a slow start as the characters are established, but the narration is in top form, with twists and turns abound from the very beginning.

From a gameplay perspective, “Assassin’s Creed 3” offers an expansion of the systems that fans of the series have become accustomed to. Connor can scale and run across rooftops and treetops, with Revolution-era Boston, New York and the northeastern frontier open for exploration and taking on missions that will further the story. Connor can fight and assassinate enemies with a wide range of weapons, and there are plenty of collectibles and side missions to be found. The free running is simple and responsive, and the combat is as flashy and entertaining as ever. All of these aspects are familiar to series veterans, but this is only a fraction of the experience. “Assassin’s Creed 3” features the most additions to the series in its history with the debut of several new gameplay styles. New to the repertoire is hunting in the frontier, commanding troops on the battlefield by horseback, weapon crafting, unforgettable naval combat and several sequences in which Desmond leaves the Animus to visit locations like downtown Manhattan in search of more artifacts. It’s a beast of a game, and that’s not even including the multiplayer suite, which features players hunting each other down while trying to remain as inconspicuous as possible. If there’s one thing to say about the game, it’s that you will never find yourself without anything exciting to do.

The final and arguably most impressive facet of “Assassin’s Creed 3” is in its presentation. The graphics are great, but as we near the end of this console cycle there is little technical improvement that can be made. However, the care given to crafting an authentic and fascinating recreation of Revolution-era America is simply unbelievable. At some points, it can feel like a history lesson, as Connor crosses paths with the likes of Samuel Adams, Paul Revere, Benjamin Franklin and George Washington, and takes part in such events as the Boston Tea Party, Paul Revere’s midnight ride and the Battle of Lexington. The world is massive and beautiful, the character animation is top-of-the-line and the voice acting is exceptional, thanks to the return of voice over veterans like Nolan North for Desmond (Drake of the “Uncharted” series).

“Assassin’s Creed 3” is a culmination of the series’ greatest aspects. The gameplay is even more varied but still as engaging as ever, the setting is arguably the best so far, and the adventure is absolutely enormous, taking at least twenty hours to complete without even touching some of the optional content. I could point out some of the issues with the game (some glitchy technical performance, gameplay quirks, slow sections of the story and a sluggish menu system), but “Assassin’s Creed 3” should not be criticized for the few things it does wrong. It should be applauded for being one of the most graceful and ambitious games of this generation.