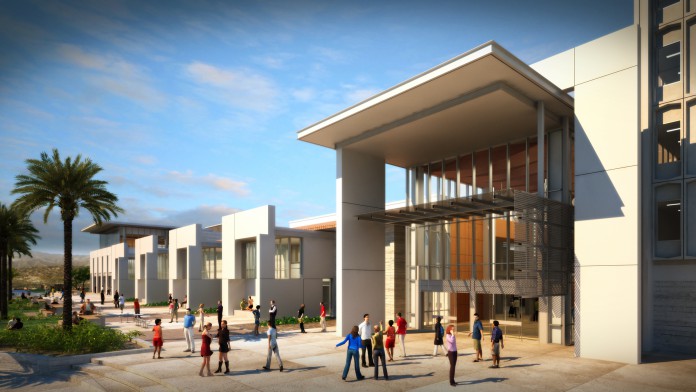 The start of this academic year brings the start of a three-year series of renovations to the Davidson Library. During summer 2013, the library added increased seating, computing and study choices for students—including giving the entire first and second floors 24-hour accessibility, effective Thursday, Sept. 27.

The library boosted accommodations to compensate for the imminent closure of its two-story building, as well as periodic closures of parts of the eight-story structure (including the current 24-hour Study Room). The goal is to minimize disruption to studying students during upcoming times of construction.

After over ten years of deliberation, the library is undergoing extensive, modernizing changes to add more space to adapt to the changing study styles of students, as well as to make the structures more earthquake and fire safe.

“The nature of people doing research has changed,” commented Rebecca Metzger, Assistant University Librarian for Outreach and Academic Collaboration, citing a new demand for power outlets. When in the library, students now tend to conduct more research online rather than strictly from books.

Concerns from the entire University of California Santa Barbara community led to this long-awaited remodel, said Metzger. Almost two years ago, the library hosted a design charrette with students to gather their input on what they wanted to be changed. While the exterior of the library remodel has been decided, the inside remains unplanned, so library outreach will be seeking student opinions as it comes together. Students can start by emailing any ideas to Metzger personally at rmetzger@library.ucsb.edu.

The overnight space will be expanded due to the immediate closure of the current 24-hour Study Room. In addition to doubling the seating of the current 24-hour Study Room and allowing for nighttime computer and printer use, the library will be adding overnight security; two Community Service Officers will be monitoring the space all night, with additional escorts available to assist students in getting home after a late night of studying.

“Given the extremely heavy use the current 24-hour Study Room receives by our students, it was imperative that we retain this important service as we prepare for the library’s impending renovation and construction project,” said Gary Johnson, Associate University Librarian for Research and Scholar Services. “We dedicated significant resources to meet student need by not only retaining but dramatically expanding 24-hour Study, now called Overnight Study.”

The library instigated several other changes to accommodate students’ needs during the drastic construction. The coffee cart is now located to the direct right of the main library entrance, offering more food and study supplies than before, plus service until 11 p.m. on weeknights. There is also an additional Graduate Quiet Study Room on the second floor, and the library’s first indoor vending machines near the Southwest staircase. Digital signs are also now present in the library’s lobby to update students on the library’s renovations and to give updates about certain parts being closed, and an exhibition will soon be mounted on the first floor to explain the Davidson Library’s history.

The construction process will never cause more than one floor of the library to be closed at once. If students need to access a book held in a closed collection, said Metzger, a staff member will assist in retrieving it. One hundred and forty million volumes will also be moved into storage in a facility called West Stacks on Los Carneros Road that the university is currently in the process of acquiring. UCSB Faculty helped distinguish the certain books less used by students to be moved to the facility. These books will still be available upon request.

Though construction will not begin until Spring 2013, students will see changes now because the library staff wanted to keep the disruption of moving furniture during the academic year to a minimum. The entire process is estimated to take about three years; with funding and architectural plans secured, the library is currently in the process of hiring a contractor for the job.

“This will be one of the last projects for a period of time funded by the state of California,” said Patrick Lenz, Vice President of UC Budget and Capital Resources, in an interview with The Bottom Line regarding the project. Lenz made the library’s proposal to the UC Regents’ Committee on Grounds and Buildings on Sept. 11. “So to do the seismic renovations, to do the upgrade, to essentially recreate this library, will be an amazing asset to the campus, the faculty, and to the students. Clearly, this is something that’s long overdue.”

During their September meeting at University of California San Francisco, the UC Regents voted to provide interim financing of $71.4 million to these renovations of Davidson Library. For more details on how it received funding, see The Bottom Line’s firsthand reports from the September meeting here: