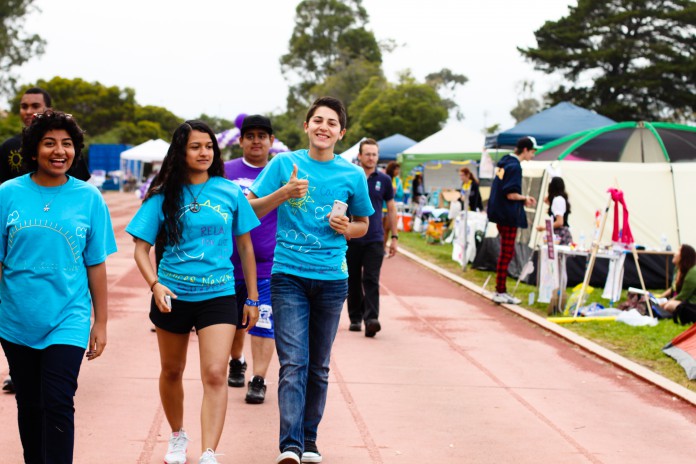 Hundreds of students, faculty, staff and local residents participated in University of California Santa Barbara’s 10th annual Relay for Life on May 11-12, and raised over $22,000 in just 24 hours. The event commenced on Friday at noon with a Survivor’s Lap, honoring the many strong cancer survivors that came out to this year’s Relay.

Participants formed teams, walked laps and raised money for the American Cancer Society. ACS is a non-profit organization that uses the money it earns through fundraisers like Relay for Life to fund cancer research, provide assistance to the sick and spread awareness about the horrors of cancer. Team members began fundraising weeks before the event and raised a grand collective total
of over $72,000.

“It’s a lot of fun and it’s not too much work to put in to raise money for cancer research and awareness,” said first-year political science major Anisha Ahuja. “Personally, my aunt died of cancer a couple years ago so it really means a lot to me that so many people come out and fight for this cause.”

The event was packed full of entertainment and activities for participants to enjoy. Student groups such as the Amatory Dance Crew and the Naked Voices a cappella group provided entertainment over the course of the 24 hours.

“My favorite part of the event was the DJ Club that played all night because I got to dance and do the cha-cha slide,” said Ellen Araujo, a third-year communication major.

While the event was lighthearted and fun throughout the day, the mood became somber in the evening as many reflected on their own reasons for taking part in this year’s Relay.

The Luminaria Ceremony, held late in the evening, was nothing short of momentous. Previously in that day, participants decorated paper bags to commemorate a loved one lost to cancer. When night fell, the luminaria lit up the track, with each bag representing a life lost in the fight against cancer. Many speakers took to the stage to say a few words in remembrance of their loved ones including a few survivors who posed as a symbol of inspiration and hope. The ceremony ended with a silent lap to remember the lost. “My favorite part of Relay was the Luminaria Ceremony,” said first-year global studies major Mary White. “I thought it was emotional and overall just for a good cause.”

Following the ceremony, the festivities continued as students enjoyed food, music and games throughout the night. Due to the event’s many generous sponsors, several prizes were raffled away Saturday morning, rewarding those who had raised over $100 independently.

“For anyone who hasn’t participated in Relay, I would say you have to come. It’s a great event, it’s for a great cause, and it’s a lot of fun, especially here at UCSB,” said White.

Many participants had previously been involved with Relay for Life and returned to be a part of the event that they had fallen in love with. Polin Simantob, a fourth-year communication major served on the UCSB Relay for Life Committee at her fourth and final Relay for Life this past weekend.

“We’re doing something for a really good cause but it doesn’t feel like depressing or sad, it’s a really fun and joyous event and we really get to honor the people we love,” said Simantob.