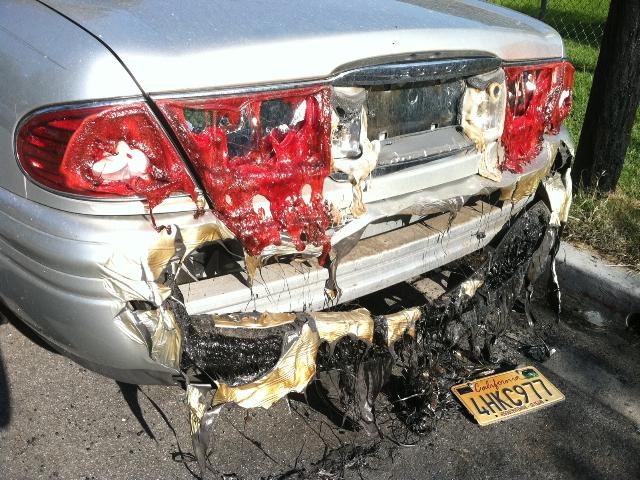 A privately owned vehicle parked on Sueno Road was set on fire in the early morning of May 9, sometime between 4 and 5 a.m. Isla Vista Foot Patrol and Santa Barbara County Fire Department quickly arrived to the scene shortly after the car went up in flames.

The owner of the vehicle, a fourth-year economics major at University of California Santa Barbara, was awoken by his roommates around 5:30 a.m. after the fire department had extinguished the fire. He came outside to where his car had been parked to discover its black, melted shell.

“The engine fell out of its casing in the street. It was just not a car anymore,” said car owner Trevor Solt.

Residents of the buildings situated directly in front of the burning vehicle were disturbed from their sleep by the event.

“I heard a really loud popping noise that woke me up and I looked out the window at the fire. It was scary,” said Garrett Morgan, a second-year economics major.

“I woke up when [the vehicle] lit up and I heard the tires popping,” said McCarthy.

According to David Sadecki, the public information officer for the Santa Barbara County Fire Department, the cause and instigator of the fire has yet to be determined.

“There is no new information available,” said Sadecki.

Though little information surrounding the case can be released to the public, the County Fire Department continues to investigate the arson.