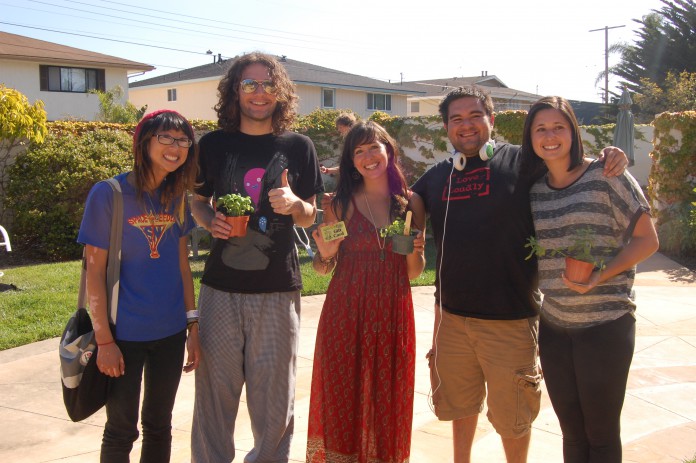 The Green Chef sustainable food competition, sponsored by University of California Santa Barbara’s Environmental Affairs Board, drew a small crowd of health food enthusiasts to the Santa Barbara Hillel courtyard Sunday, May 13. Contestants concocted a vegetarian or vegan food item that incorporated the secret ingredient of the day, zucchini, provided by the Isla Vista Food Co-op.

While making the rounds to sample each dish, audience members who paid to taste the dishes and actively participate in the event voted a first and second place winner for each of the three categories- creativity, tastiness and sustainability. Utilizing the most environmentally sound ingredients held the most weight in the competition, as EAB’s primary goal for the event was to promote and celebrate local, organic foods.

“We have a farmers’ market every day of the week in Santa Barbara county; this kind of food is quite accessible,” said Lehmann.

One of the main aims of the Green Chef contest is to show a wider multitude of people the benefits and availability of local, sustainable food sources.

“This event lets people have the opportunity to try [sustainable foods],” she said.

Another of the competing chefs, Gabrielle Dimaranan, a third-year psychology major, enjoyed the challenge of using a required secret ingredient and dabbling for the first time in vegan cuisine. Dimaranan also advocates for shopping locally.

“Everything’s fresh and you know where it came from,” she said.

Green, a third-year environmental studies major and member of EAB, became interested in the ethics and benefits of sustainable foods because of the global impact of the food industry. Another organizer of the Green Chef event, Camilo, a third-year environmental studies major, agrees that eating consciously and sustainably can effect positive change on the planet.

“Our food system is such a huge player in destroying our environment,” she said.

Green commented on the popularity of processed and packaged foods that lack vital nutrition.

“People need to come back and realize what good food really is,” said Green.

This quarterly competition proved successful, as the food disappeared quickly and hungry attendees were exposed to an array of delicious, sustainable foods ranging from brownies to tacos.

Molly Goldman, a fourth-year sociology major, commented on the unconventional zucchini lemonade brought by one of the chefs.

“There were definitely some creative dishes here,” said Goldman.

Despite the high number of exported and imported produce from Santa Barbara County, EAB proves through the Green Chef competition that buying and eating locally grown, organic food is not only possible, but delicious as well.