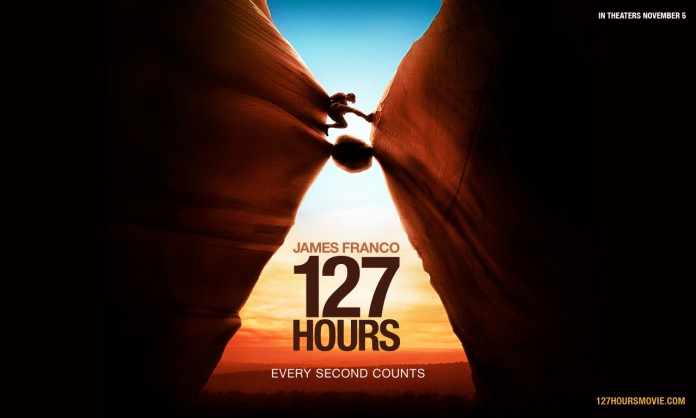 Up until recently, most UCSB students probably associated James Franco with his role as a drug dealer in the 2008 movie Pineapple Express. But after his performance in the 2010 film 127 Hours that premiered at the Santa Barbara International Film Festival last weekend, I’m sure that people will start identifying Franco with that movie from now on (if they haven’t already).

Franco plays Aron Ralston, a man who in 2003 got trapped under a rock in Utah’s Blue John Canyon and eventually cut off his right arm in order to escape. Franco delivers an exquisite and profound portrayal of Ralston’s endeavor as the film chronicles all 127 hours of his story in one hour and 34 minutes of cinematic mastery.

Since the story is based on Ralston’s autobiography Between a Rock and a Hard Place, the premise and outcome of the story is no shocker to those who view it. But what makes 127 Hours stand out is how beautifully and effortlessly Franco’s character uses his isolation to his advantage.

As the only character on screen for about 95 percent of the movie, Franco portrays Ralston’s frustration, vulnerability, and ultimately growth as a person in a way that makes audiences feel like they’re stuck under that rock with him, sharing his initial exasperation and panic, taking part in his small but significant victories (such as when he retrieved his knife from the ground using his foot and a stick), and feeling his excruciating pain during the climax of the film when he frees himself.

“Because there were no other actors, in a way it was like we (the cast and crew) were all sharing the character,” said Franco at the Santa Barbara International Film Festival.

There’s also an unspoken relationship between Franco and the viewer because the viewer feels like he or she is the only one who can empathize with his character in his dire situation. At least Tom Hanks had a volleyball to talk to in Cast Away; Franco only has himself to confide in via a video camera. It is during those scenes when he records himself that the connection between him and the audience seems most potent since he’s looking straight into the camera. That’s where the film transcends its literal concept and delves into an emotional realm that not many other films can enter.

Despite how the film primarily rides on Franco’s performance, I believe that his acting alone would not have been enough to garner as many awards and nominations as it has. Throw in Danny Boyle’s flashy, stylistic direction, and suddenly the film is impeccably stimulating both emotionally and visually.

One shot that struck me was when the camera showed Franco peering into his water bottle to examine how much water he had left. The shot panned from the bottom of the bottle looking up at Franco’s eye to the top of the bottle looking down at the bottom, where only a pathetic amount of water remained. The contrasting angles represent Franco looking down at himself in the canyon—an outsider staring into a desolate, hopeless hole.

The coupling of Franco’s acting and Boyle’s directing is what gives 127 Hours its driving force and ability to speak to audiences on a deeper level (literally and figuratively).

Although it’s not a feel-good movie you’d want to watch over and over again, it’s a film that puts things in perspective. It reminds us that those things we all take for granted—whether that be family, a home, or even contact lens solution—could be gone in 127 hours, a day, or even a second.