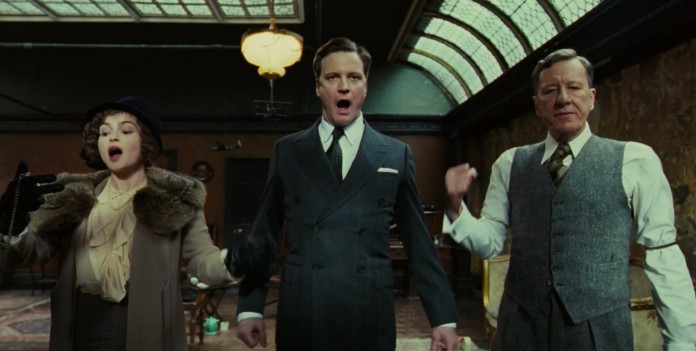 There were definitely moments in The King’s Speech that left me, in a somewhat ironic way, speechless. As the Duke of York-turned-King during the 1920’s and ‘30’s, Colin Firth delivers a provoking and heart-wrenching portrayal of the royal figure as he tries and fails to hide his speech impediment from society, many times with no avail.

The opening scene of the film stunned audiences into an awkward silence as the duke steps up to a microphone in a stadium full of people, only to start stammering moments into his address. It is from this beginning scene that the duke establishes himself as a sort of anti-hero, an unexpected underdog and subsequently sets the premise for the movie.

From that point forward, the film chronicles the king’s search for a cure (as strongly encouraged by the Duchess, played by Helena Bonham Carter) and how he eventually ends up at the hands of Lionel Logue (played by Geoffrey Rush), a hole-in-the-wall Australian speech therapist whose unorthodox methods help the disheartened king overcome both his impediment and his self-deprecating attitude.

But the climax of the movie, though inspiring and monumental, isn’t even the most memorable part of the movie. It is the bond that develops between the student and his teacher over the duration of the film that gives The King’s Speech its heart, as well as its humorous elements. The relationship between Logue and ‘Bertie’ (as Logue calls him) begins as only a professional one, but gradually deepens into a simultaneous friendship that makes Bertie’s primary purpose for seeing Logue a much more intimate affair.

Through their therapy sessions, Bertie slowly starts to fix his speech problem and also discloses personal information to Logue that gives both Logue and audiences a look into his troubled past. His lamentable childhood memories, which Logue believes contributes to Bertie’s stammer, only make viewers more sympathetic to Bertie and their desire for him to succeed more prominent.

As the king, whose standard of excellence is thrust upon him, Firth does an impeccable job at portraying Bertie. He doesn’t try to exaggerate the king’s notorious stammer, which is what really gives his character authenticity. Though the king’s personality is also not that appealing to begin with (Bertie is reserved, stubborn, and frequently has sporadic temper tantrums), Firth somehow makes his character likeable to the audience and establishes himself as the afflicted protagonist.

The growth of Bertie’s character over the course of the film is supported beautifully by Rush’s representation of Logue, who takes care not to overshadow Firth but still manages to stand out. The onscreen chemistry between the two carries the film for its nearly two-hour running time, and redefines the meaning of a “bromance.”

Ultimately, The King’s Speech dazzles with its acting rather than with special effects and high-action scenes. For those looking for a visually stimulating film, this one might not be what you’re looking for. But for film enthusiasts searching for a thought-provoking, heart-wrenching and historically conscious film, The King’s Speech is more than ideal.