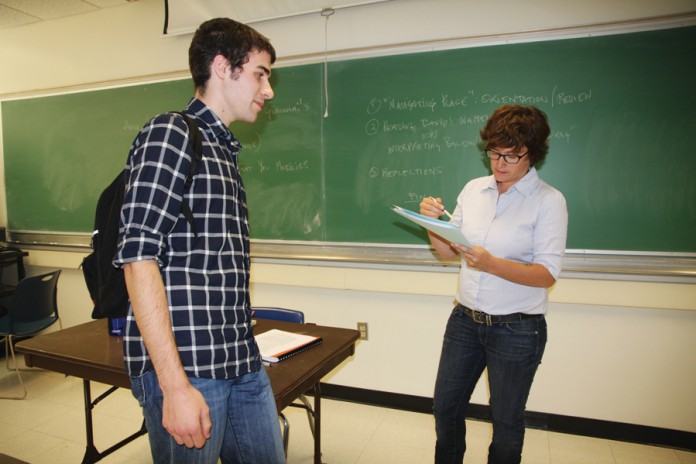 RULE #1: GO TO THE FIRST WEEK OF CLASS
As a freshman, you will be competing against upper-classmen who may need the same classes to graduate. That’s where dedication, perseverance, and a working alarm clock come in handy:.“If you really want to crash a class, there is usually someone who doesn’t want that class,” says Lara Stone, a third-year Environmental Studies major. “But to really get it I have stayed a few weeks in a class doing all the work.”

RULE # 2: GET ON THE WAIT LIST
Email the professor ahead of time. They may already be preparing a waiting list, or utilizing the new online waiting list system. “You can email the professor early to tell them you’re crashing, which can increase your chances,” says Paul Rubin, a third-year Business-Economics major. “If there’s a wait list you can show up for a day, get your name on that, and wait until they tell you if you are in or not.”
RULE #3: GET TO KNOW THE PROFESSOR
During the first week of school, sit in the front row, take notes, and engage the professor, in the classroom and outside during office hours. This lets them know that you want to be in the class and will do anything to get them to let you in. “I knew someone who talked to the professor before class, participated in class, even offered to take the prof out to lunch,” says Kristen Tolle, a third-year Sociology major. “That student got into the class and the prof has never forgotten the student.”
RULE #4: KNOW WHEN YOUR FIRST PASS TIME IS
Many incoming freshmen make the mistake of missing their first pass time to register for classes. Since most majors restrict pass 1 to majors or pre-majors only, you have an advantage during your first pass time of registering for classes before other non-majors who may just be using a class to fulfill a GE. “Make sure during your first pass time you sign up for the classes with the least amount of space or the classes that you need the most!” says Lauren Feliciano. “That way, during your second and third pass times you can sign up for classes that generally do not fill up as fast.”
RULE #5: GO TO SECTIONS THAT AREN’T THAT POPULAR
If you really need to get into a class, crash the sections that are the least popular or have the most spaces, which are usually early in the morning, late at night, and on Fridays. “I crashed a section for an art history class my first quarter freshman year, sat closest to the TA, and got my name first on the list,” says Mark Kane, fourth-year Micro-Biology major. “She ended up going straight down the list, so I was first to get the class.”