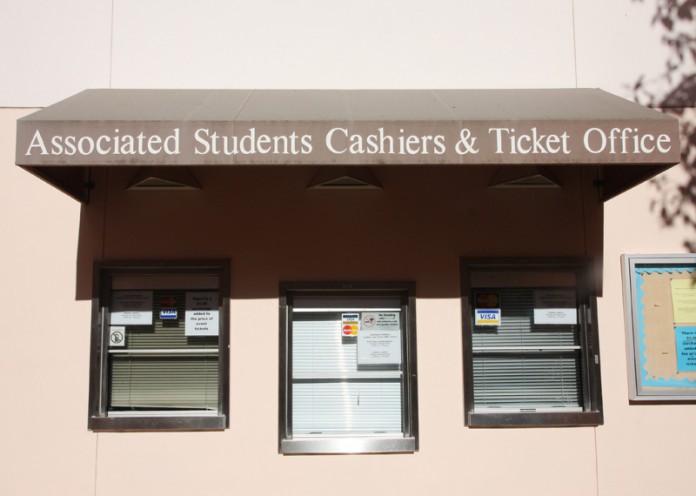 When most Gauchos think Associated Students, they think student government and behind-the-scenes action. Yet, AS is actually made up of more than 30 student-run organizations and committees, as well as numerous campus-run services and resources paid for by student fees. The best part about AS? They are usually looking to hire undergraduates.

The AS Bike Shop, located near the old pool on campus, is the best place to receive free advice and discounts on bike repairs.
“We’re here to service all your bike repair needs and to offer expert advice,” said Connor McDonnell, a fourth-year Psychology major and employee for two years. “Stop by some time for free chain lube and air for your tires.”
The AS Cashier’s Office, located near the UCen, is the most common place for students to buy readers, bus stickers, and event tickets. However, they also provide discounted tickets to theme parks such as Six Flags and Disneyland, as well as short term emergency loans for students.
“AS co-sponsors three types of financial support packages,” said Paul Monge-Rodriguez, AS president and fourth-year Global Studies and Sociology major. “The Childcare Grant, the Emergency EOP Grant, and the Emergency AS Loan. Each package has its own set of qualifications and is awarded on a case-by-case basis.”
The AS Legal Resource Center, along with the AS Office of the Student Advocate, provides students with free and expert legal advice regarding California State Law, Federal Law, and Local Ordinances. Basically, if you get caught being drunk in public or drinking in the dorms, these are the two AS resources you want to check out the most.
“AS employs attorneys to help students receive basic legal advice or seek other legal resources,” said Harrison Weber, a third-year History of Public Policy major and current Student Advocate General. “The Office of the Student Advocate is tailored for students who seek advice on either University or Housing Policy matters. Everything is completely confidential and free of charge.”
99.9 FM KCSB is a popular radio station in the Santa Barbara community. As an AS-funded organization, it is both a non-commercial and educational broadcasting tool for the public interest. A predominantly student-run station, KCSB allows students to work with other students while learning the behind-the-scenes of radio.
“KCSB is a very valuable resource for students to get involved with,” said Kristen Tolle, a third-year Sociology major and sports broadcaster for KCSB. “You can build connections with other branches of radio stations everywhere and ‘get your foot in the door.’ Plus, you gain experience with expensive and complicated equipment, and learn how to have a ‘radio voice’.”
As a green campus, UCSB prides itself on being an environmentally friendly and conscientious community. The AS Recycling Program is responsible for most of the recycling on-campus by hiring undergrads as route riders who bike around campus gathering recycling from the beige receptacles, or as techno-recycling technicians who collect electronic waste from bins and process it for sorting.
“We collect a large amount of material on campus and contribute to 68% of the total recycling done on campus,” said Ryan Kintz, the AS Recycling Program Supervisor. “We strive to compost or recycle all items while remaining completely carbon-neutral by using electric-powered and man-powered tricycles.”
AS Publications, and AS Notes have note-taking services that can provide a model for incoming freshmen or new students by providing clear copies of diagrams, formulas, and other illustrations. AS Notes is a great source for learning independently that helps you further understand material in your class. Plus, all AS notetakers are either grad students or professors teaching the courses.
“AS Publications not only helps you with your notetaking, it’s also extremely cheap when it comes to making fliers and copies,” said Cori Lantz, a fourth-year Political Science major.
The student government portion of AS is primarily made up of the Executive Board, the Legislative Council, and the Judicial Council. The Exec Board consists of five elected students who represent the undergraduate student body of UCSB on all local, state-wide, and administrative campus affairs.
“The AS budget is supported by quarterly student fees,” said Monge-Rodriguez, President of the Exec Board. “So we are directly accountable to serving the students’ needs, and you as fee-paying students are entitled to all of the available resources, services, and opportunities.”
The AS Judicial Council provides students with a greater voice within the campus community. Comprised of a chairperson and 4 Members-at-Large, it is similar to a US Supreme Court by allowing students to bring their concerns forward in a professional and open forum.
“The Judicial Council is more of an internal AS organization,” said Weber. “It deals with matters within AS over matters concerning AS statutes.”
The AS Legislative Council consists of elected representatives who serve as the policy-making and governing body of AS. They strive for open communication between students, the administration, and the community.
Overall, the students and staff who are both employed by AS and who work on a volunteer basis do their best to provide the best UCSB experience for students, and to give them the most bang for their buck. According to Monge-Rodriguez, AS uses a 9 million dollar budget to host large concerts, organize community service projects in the local community, and bring renowned lecturers to campus.
“AS really is a place for everybody,” said Lantz, who is also the external VP for the Exec Board. “Anything you could picture yourself doing in student government, there is a way to do it. There are resources for students to do whatever they think is important to do.”
So whether it’s working within student government, collecting recycling on-campus, or applying for an emergency loan, AS has everything a growing Gaucho needs in order to succeed and to become involved in more ways than you can possibly imagine.