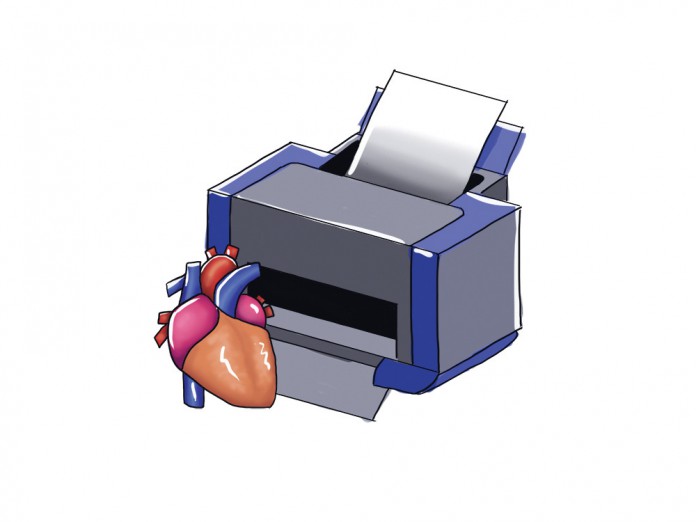 In addition to creating plastic and metal replacements for internal organs, new developments in 3D printing by researchers at Carnegie Mellon University have demonstrated the viability of “bioprinting” soft internal organs as complex as the heart or brain. New technology has the potential to revolutionize the medical field and perhaps even make it so organ transplants are no longer needed.

With more conventional medical 3D printing that builds hard objects, such as a replacement rib cage, the printer works by depositing the material layer by layer until it creates the 3D implant. Each layer has to be able to support the layer that is deposited on top of it, which is no problem given that it is a hard material being printed, but herein lies the basic problem of printing semi-firm organs, or tissue and collagen.

“The challenge with soft materials — think about something like Jello that we eat — is that they collapse under their own weight when 3D printed in air,” said Adam Feinberg, an associate professor of Materials Science and Engineering and Biomedical Engineering at Carnegie Mellon University. “So we developed a method of printing these soft materials inside a support bath material. Essentially, we print one gel inside of another gel, which allows us to accurately position the soft material as it’s being printed, layer by layer.”

Researchers designed a printer that could fabricate soft material, like tissue. In order to enable the 3D printed object to not collapse on itself, they developed a technique that they call freeform reversible embedding of suspending hydrogels (FRESH). FRESH involves printing biological hydrogels made up of polysaccharides, or proteins, into another hydrogel “support bath” made up of gelatin microparticles; this helps to maintain the shape of what is being printed without it collapsing if it was simply printed in air.

Once the 3D hydrogel object is printed, still suspended in the support bath, the entire thing is heated to 37°C in order to melt the gelatin while maintaining the structure of the printed object. Small amounts of residual gelatin would not cause any harm and might even promote adhesion, according to the research report published in Science Advances.

Feinberg explained some of the organs that the researchers were able to create using the FRESH technology. “We’ve been able to take MRI images of coronary arteries and 3D images of embryonic hearts and 3D bioprint them with unprecedented resolution and quality out of very soft materials like collagens, alginates and fibrins.”

The next step is to use live cells in the printing process. The experiments performed thus far have only created model organs that mimic the shape, but not the function of the actual body parts. Fienberg and his team showed that cells can survive the FRESH process when they used it to print a simple sheet of muscle cells. They want to continue researching in the hopes of creating heart muscle “patches” to repair heart defects, and potentially repair damage from heart attacks by helping to pump blood.

While the cost of using such a printer would normally be around $100,000 and would require technical expertise to operate, Feinberg and his team designed the technology to be extraordinarily accessible. FRESH uses open source software and hardware, so that the file with the design of the printing syringe can be downloaded and printed; the gelatin “support bath” can be easily recreated using a common blender. The researchers even tested FRESH on a $400 3D printer to demonstrate. Scientists hope that the wide accessibility of the technology could lead to new breakthroughs.

“I hope other people will take this up and run with it,” said Feinberg. “Even in ways I can’t imagine.”