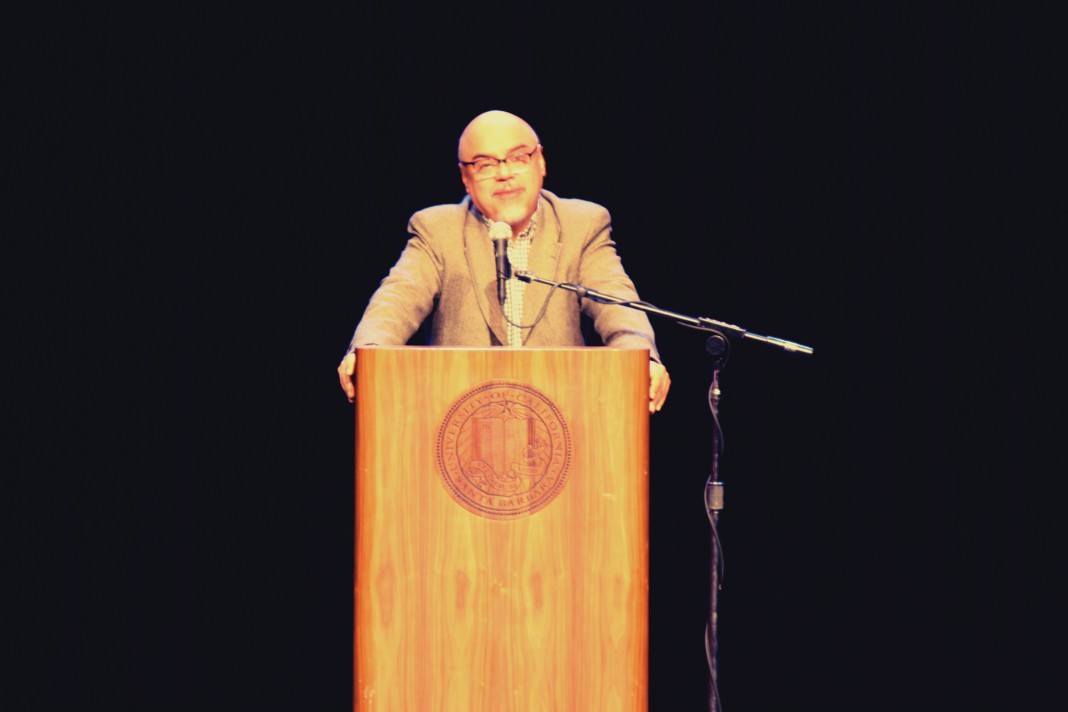 Héctor Tobar, novelist and Pulitzer Prize winning journalist, came to Campbell Hall on Nov. 2 to speak about his book Deep Down Dark and the journey that each of the 33 miners that became entrapped in the Chilean mine collapse in 2010 went through during their 69 days before rescue.

Before coming to UCSB, Tobar gave The Bottom Line some insight to his life as a journalist and novelist in two interviews to help us Gauchos know him a little more, beyond his Deep Down Dark story. He claimed that he began as “a loner who liked to read and write” and that he got into the field because journalism opened the door to a world where he felt powerful when he saw his name in print. He talked about how he started off as a beginner just like anyone else and said that the hardest part of being a journalist was “reporting: inserting yourself into other people’s lives.”

However, Tobar shared that the best part was learning about the human experience and “taking a journey into the memories and the perspective of your subjects.” He discussed how the profession has changed, how as a burgeoning journalist he was given opportunities that aren’t necessarily available to beginners now, how people now are working harder than ever for less money and how with the electronic age the audience of an article has now become worldwide, reiterating many points that were detailed in his recent article from The New York Times, “Who’d be a Journalist?” Interestingly, he was encouraging about the field of journalism, discussing how many things have also changed for the better, and why he loves his profession.

Not only does Tobar love journalism, but he also loves being a novelist. He said that he maintains a different identity as a writer separate from his reporting, which could be attributed to the very different styles of the two genres, but that the closest blend between both journalism and novel-writing is his book on the Chilean mine because it put together all of his skills. He was given the opportunity to write the book from his agent and he easily accepted.

“Something told me it would be an epic story with all sorts of hidden details and human drama that no one knew about,” he said. “I was proven right.”

He continued to say that he was very excited to represent them as their story was the first of its kind in his 28 years in the field.

“They went in as miners and came out celebrities,” he said. Beneath all of the fame and media coverage he found that, at its core, it was a tale about family and its power.

His lecture Monday night expanded on this idea of family and the further explorations of Deep Dark Down. He further detailed the process of the survival in the mine during the 17 days the men endured before they were discovered, the struggles with instant fame and stardom upon exiting the mine, and the physical, emotional and spiritual journeys that the men experienced in their time so far underground.

Tobar shared anecdotes regarding the different takes of the men and how each one had the same situation but varying stories to tell, each story describing ordinary people who suffered extraordinary trauma. He discovered secrets of shame and betrayal, selflessness and spirituality, the men had withheld from the media as they were so raw and honest with how they revealed the true story of the incident.

The story began on that day in August 2010, when the 33 miners could not make it home to their families and had to create a completely new dynamic with the people around them. By the end of the journey, they were bonded in a way that could not be broken, and had to face brutal questions regarding the value of life and relationships.

The lecture and the book are just expansions of the familial love and belonging that the men discovered within the mine. Tobar discovered through the stories of the men that they all realized the best thing about them was all of the love they brought into the world; it wasn’t the fame, the money or the heroism that saved them. It was the sense of belonging to a family and group of people.