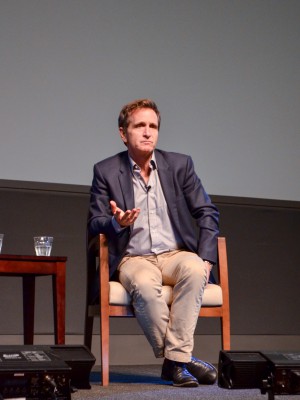 If you attended the screening of American Horror Story on Monday, Dec. 1st at Pollock Theater, you had the unique opportunity to spend an evening immersed in the imagination of both the show and its executive producer, Dante Di Loreto. The night opened with an episode resurrected from Asylum, the show’s second season, which follows the lives of both the patients and caretakers in a New England sanitarium. The episode haunted viewers with images of corrupt nuns, blood-thirsty and murderous doctors, stories of a patient who believes she is Anne Frank, and, to the audience’s despair, a bone-chilling lobotomy scene. Afterward, a Q & A session allowed for the audience to glimpse into the life of Di Loreto, his educational experience, and his role in the production of American Horror Story.
Di Loreto, who attended both University of California, Santa Barbara and the American Film Institute, began his discussion with a recollection of his educational experience. He spoke fondly of his time at UCSB, which began in 1977: “I went to this school during the remnants of a very liberal time. People smoked in class and had sex with their professors.” Di Loreto graduated with a theatre major and the ambition to become an actor. He pursued roles in episodic television and continued his work in the industry when he enrolled in the American Film Institute to obtain an MFA in producing.

Di Loreto is currently the executive producer for American Horror Story and Glee. He boasts two Emmy Awards for his work on television, and they were certainly reflected in the enthusiasm he had onstage when he spoke about his work with the two shows. He begins his day on the set of Glee, and when asked what he does, he said anything from directing, to editing, to throwing eggs at the actors on set.

But his day does not end with Glee. Di Loreto spends the rest of the afternoon producing American Horror Story. With a backstage look into the making of the show, the audience realized that the show is a great production. Typically, fifteen thousand hours of labor creates one hour of television, and actors, directors, writers, producers, editors, cameramen, artists and set designers are only a few of the hundreds of people involved in its making.

Di Loreto was hasty to acknowledge the writers of the show. AHS staffs six writers, three men and three women, and they produce huge volumes of work every day. Because of the show’s unique anthology design, each season consumes enormous amounts of story, requires the staff to conduct countless hours of research, and demands strong creative vision. In his opinion, writing is the beginning, middle and end of the production.

There exists an extremely high standard for today’s TV, but Di Loreto is adamant that both Glee and AHS are at the forefront of television success. “Both reinvigorate genres that have disappeared from television. And AHS has really become a point of conversation–an event,” he said.

But what is it about horror that appeals so much to viewers? “Horror livens the senses and is thrilling,” he said. “It expresses feelings that need to be expressed.”

Di Loreto didn’t forget to offer his biggest tip for success in the industry: having friends who can support your creative endeavors. The entertainment business is riddled with rejection and competition, and it is necessary to make and maintain relationships with people who both support and propel you forward. The greatest thing he learned as a producer is to face his fears, because the amount of work that he must conduct can be quite intimidating.

So, at the end of the day, what exactly DOES Dante Di Loreto do?

“I make sure the show’s on time for you to see it,” he said.