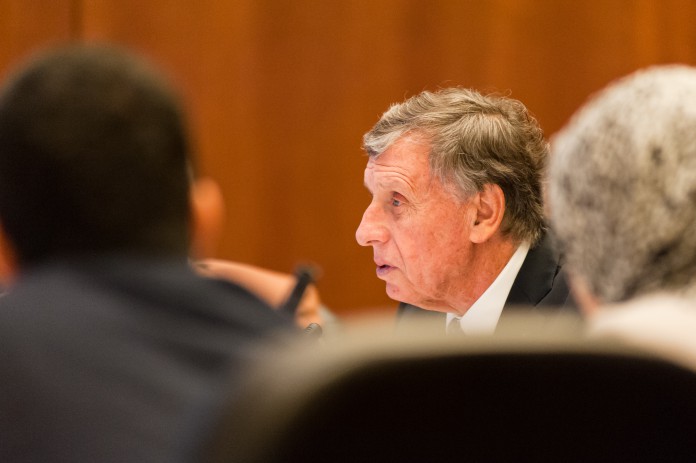 As tuition and related costs continue to rise, the financial burden on students and their families in the University of California system has never been more crippling.

The majority of the presentation focused on a number of “facts and myths” about the UC budget, aimed at dispelling false accusations directed at the Regents regarding their role in the current budget shortfall. “The national narrative is that the cost of higher education is going up,” Brostrom said. According to the Office of the President, though, the total cost of educating a single student has dropped approximately 15 percent since the 1990’s when adjusted for inflation.

During that same time period the contribution from the state has dropped significantly, relying on increased student tuition to cover the budget shortfall.

“I’m tired of seeing this university continuously underfunded,” said Regent Richard Blum. “We are now educating 78,000 more students with the same amount of money, that’s real dollars, than we did 25 years ago. How did we do it? Larger class sizes, not a good thing, greater tuitions, letting buildings run down.”

There have been serious negative effects on UC campuses due to lack of funding, according to Lenz. The budget shortfall has affected projects of high priority and importance.

“Of the 15 projects that are here…most of these are either fire, life and safety, or seismic renovation projects, so they’re fairly critical,” Lenz said. “We’ve had experiences on some campuses, where they literally put a fence around the facility because there wasn’t enough funding to do the seismic renovation.”

The Regents directed blame at the politicians in Sacramento, making no attempt to hide accusations of systemic corruption. Regent Norman Pattiz spoke unabashedly on the topic.

“The politicians and the governor are working on a wide variety of issues, many of which involve reelection, that don’t take into consideration the actual problems that we face right here,” Pattiz said.

Many of the myths presented by Brostrom centered around supposedly false public assumptions of the budget shortfall’s cause. Of particular concern to the Regents was the growing sentiment in California that increased out of state registration is taking university spots away from in state residents.

Despite the discussion, the Regents were no closer to closing the budget shortfall and they tabled further deliberation until November.

AS Election Results and Takeaways