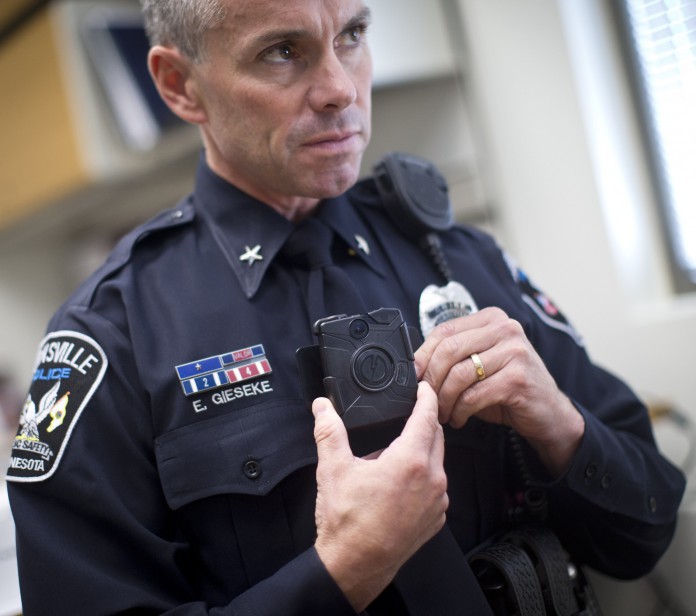 Responding to an online petition in the aftermath of the police shooting of an unarmed teen in Ferguson, Missouri, the White House stated its support for the use of body-worn cameras by law enforcement officers on Monday, Sept. 15, 2014.

Ferguson made international headlines after a white police officer shot Michael Brown, an unarmed African-American teenager, on Aug. 9. Residents of the predominantly black St. Louis suburb took to the streets to protest in the days and weeks following the shooting, calling for justice for Brown and greater representation in their local government and law enforcement. The police officer who killed Brown, Darren Wilson, has not been charged with a crime.

In the weeks following Michael Brown’s death, over 150,000 people took to the White House website’s petitioning program, We The People, to sign a petition urging President Obama to create and sign a law requiring all state, county, and local police to wear body cameras. Through the recording of law enforcement interactions with the public, the petition suggests a potential solution for the deep mistrust between citizens and those sworn to protect them.

We The People is an online petitioning platform on the White House website where users can create and sign petitions encouraging the federal government to take action on a variety of issues. If a petition gets enough signatures, White House staff will review it, make sure it gets to the appropriate policy experts, and issues a response. The petition gained 154,747 signatures, well over the 100,000 signature threshold necessary before the White House is required to issue a response. Roy L. Austin Jr., the deputy assistant to the President for the Office of Urban Affairs, Justice and Opportunity in the Domestic Policy Council, wrote the response on behalf of the Obama administration.

“For years, this Administration has advanced the use of cameras, both body-worn and vehicular, and recognized the numerous benefits to making cameras available to law enforcement officers,” wrote Austin. “We support the use of cameras and video technology by law enforcement officers, and the Department of Justice continues to research best practices for implementation.”

Although it was a statement of support and solidarity, Austin still warned of the financial costs of mass implementation that “cannot be ignored.” The response also brought up many unanswered questions about privacy, such as who should have access to the videos, how long they should be preserved, and exactly when cameras should be turned on, among other issues.

For all the concerns surrounding police use of body cameras, support for their use has grown. Even the American Civil Liberties Union, usually against such recording tactics, declared its support for the use of body-cameras. The ACLU said in a statement, “Police on-body cameras are different because of their potential to serve as a check against the abuse of power by police officers.” This is an argument that has been echoed across the country by citizens and law enforcement officials alike.

The White House response cited a Justice Department report which states that there is enough evidence to demonstrate that both police and civilians behave better when they know there are cameras around. The report also cites how footage from the cameras can be used for the training of new officers.

The growing support for body cameras can be seen in police departments across the country. Some officers in Ferguson have started using the cameras, and after launching a pilot program in early September, the New York Police Department has become the largest department in the United States to adopt the use of on-body cameras. And beginning Oct. 1, the U.S. Border Patrol will start testing their use at the Border Patrol’s training academy in Artesia, New Mexico. Popularity appears to be growing more rapidly in areas that are often associated with police brutality and abuses of powers, and where transparency is in high demand.

California appears to be leading the launch of body camera technology. A KSBY investigation back in May 2014 focused on the impact of the use of body cameras in California. According to a year-long study of the cameras at a police department in San Bernardino County, the use of force by police officers has gone down 59% and citizen complaints went down 88%.

The KSBY investigation report stated, “San Luis Obispo Police say they have already tested them, and Arroyo Grande, Santa Maria, Guadalupe and the Santa Barbara County Sheriff’s Office are looking into them, but are waiting for more usage guidelines to come out.”

The Santa Barbara County Sheriff’s Office said Isla Vista Foot Patrol will soon be using microphone cameras, according to KSBY. “[The Sheriff’s Office] says it’s not specifically in response to big parties like Deltopia, but because they are often face to face with the public. Santa Barbara Police don’t have department-issued body cameras; however, some officers use personal cameras to record incidents.”

“We also know that cameras alone will not solve the problem where there is mistrust between police and communities,” wrote Austin. “As a nation, we must continue to address this lack of trust. Most Americans are law abiding and most law enforcement officers work hard day in and day out to protect and serve their communities. When there is trust between community and law enforcement agency, crimes are more easily solved. And when community members and officers know that they will be treated with fairness and respect, public safety is enhanced.”