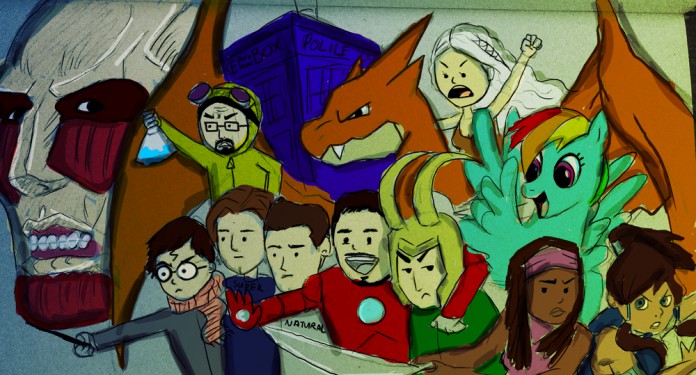 Great novels, TV shows, music, movies, and art have always invited appreciation and passion. Lately, however, there has been a rise in the prominence of fan communities, commonly known as fandoms. While fandoms have really been around since the earliest book clubs, they have certainly become more popularized in the past couple of years. Social media sites such as Tumblr, Reddit, and fan-fiction websites have made communication between fans of any given work much easier while also providing a platform for the creation and display of fan art.

These social media sites enable the formation of a community that is passionate about a particular work of art, and the community, in turn, fuels the passion its members feel for the work. Sometimes, that passion leads to the creation of beautiful fan art; other times, it leads to us taking the work of fiction a little too seriously. Tumblr user huffleluffagus admits that Tumblr has changed the way she feels about TV shows and books.

“I am more passionate about them now that I can talk about them with other obsessed people,” she said. Huffleluffagus also dedicates much of her time to running a play-by-post role-playing website that is inspired by the work of Tamora Pierce and set in the world of Pierce’s novels.

Tumblr has a large number of blogs dedicated specifically to one or multiple fandoms, and the majority of posts on these blogs are brilliant examples of digital fan art. Fans are willing to spend an enormous amount of time to create gif sets, digital artwork, drawings, and even fan-fiction that spans dozens of chapters and is sometimes longer than the original work itself. The driving force behind the creation of all this fan art is passion for the original work, passion that is certainly enflamed by the online fandom community. And, for the most part, this passion is constructive, and fan art is a creative outlet for emotions. But are those emotions always warranted? Do we sometimes forget that it’s only fiction?

Through my own experience on Tumblr, I have witnessed arguments between different fandoms regarding the superiority of one over the other. I have also witnessed very heated arguments within a fandom itself when fans have contradictory opinions about characters or character relationships. I have read several (rather lengthy) posts, containing more expletives than sentences, immediately following a character death or a shocking event in a TV show or book. In general, I have noticed that we have started to become too personally invested in the lives of fictional characters and that the fandom actually encourages this fascination.

The question remains, however, of whether this fascination is excessive. While it makes sense that certain exemplary works of art emotionally affect people, and that people might want a little escape from everyday life by vicariously living through the characters of books and TV, the practice becomes unhealthy when we become so emotionally invested that we start abusing and bullying those who disagree with our opinions online.

It is even more troubling when the opinion of a fandom starts to affect the original work. ABC’s “Agents of S.H.I.E.L.D.” is essentially a revival of character Phil Coulson brought about by popular demand. Across the pond, writers Steven Moffat and Mark Gatiss often place characters Sherlock Holmes and John Watson in situations that suggest a relationship between them, even though the series establishes Watson as heterosexual, to placate the fans that “ship Johnlock” in the BBC series “Sherlock.”

So, while having a community to discuss TV shows, books, or movies is generally a positive thing, especially when such wonderful works of art result from these communities, we need to be careful how much power we allow these fandoms.