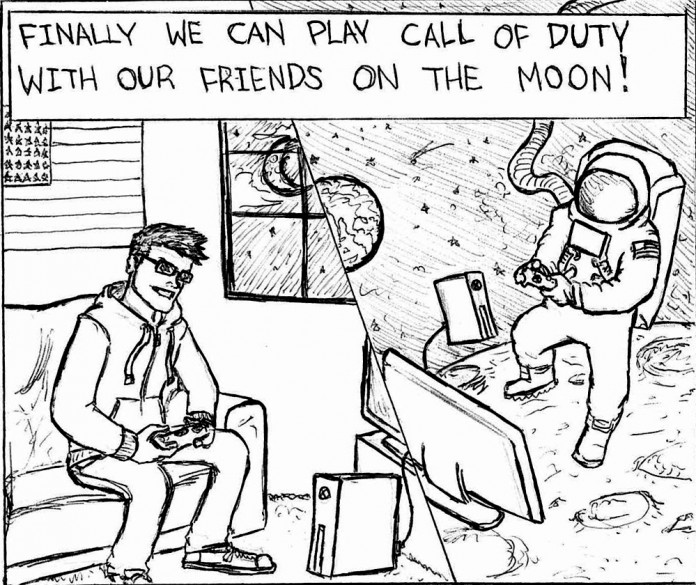 In a demonstration, a new laser communication system by NASA has succeeded in transmitting data from the moon to the Earth at a record-breaking speed of 622 megabits per second (Mbps). This breakthrough moves scientists much closer to a new generation of laser-based space communications.

239,000 miles away, orbiting the moon, the Lunar Atmosphere and Dust Environment Explorer (LADEE) is on a mission to gather detailed information about the moon’s unique atmosphere. Installed on the spacecraft is the Lunar Laser Communication Demonstration (LLCD) system developed by the Massachusetts Institute of Technology’s Lincoln Laboratory. This system uses a pulsed laser beam to transfer data hundreds of thousands of miles between the moon and Earth.

The mission of the LLCD system is to “use a highly reliable infrared laser, similar to those used to bring high-speed data over fiber optic cables into our workplaces and homes,” according to NASA. “Data, sent in the form of hundreds of millions of short pulses of light every second, will be sent by the LADEE spacecraft to any one of three ground telescopes in New Mexico, California, and Spain.” This laser-based space communication system is the first NASA system of two-way communication that uses lasers instead of radio frequencies.

Lately, the use of radio frequencies has not been able to meet the data requirements of the agency, leading scientists to look for newer and faster ways of transferring data. If there was ever any doubt that the LLCD is fast, those doubts have now been put to rest. The LLCD system broke download speed records when a laser transmission of data between the LADEE spacecraft and a ground station in New Mexico clocked in at 622 Mbps. To put this in perspective, the average Internet user in the United Sates has a connection speed of 8.7 Mbps, according to a report recently put out by content delivery network Akamai Technologies.

In addition to the fast download speed, the experiment demonstrated an impressive upload speed when an error-free data upload rate of 20 Mbps was transmitted from the ground station in New Mexico to the LADEE spacecraft.

Badri Younes, NASA’s deputy associate administrator for space communications and navigation, said in a written statement that NASA is “encouraged by the results of the demonstration to this point, and we are confident we are on the right path to introduce this new capability into operational service soon.” This high-speed laser communication system will allow for new innovations in space communication technology, such as better image resolution and 3D video transmission.

Laser-based space communication may also lead to “the development of more efficient and cost-effective space communications equipment,” according to NASA’s website. Another longer-term demonstration mission, called Laser Communications Relay Demonstration (LCRD), is currently being planned by NASA. The mission, set to launch on a commercial satellite in 2017, has the potential to demonstrate 10 to 100 times higher data rates than standard radio frequency systems and for the same amount of mass and power.