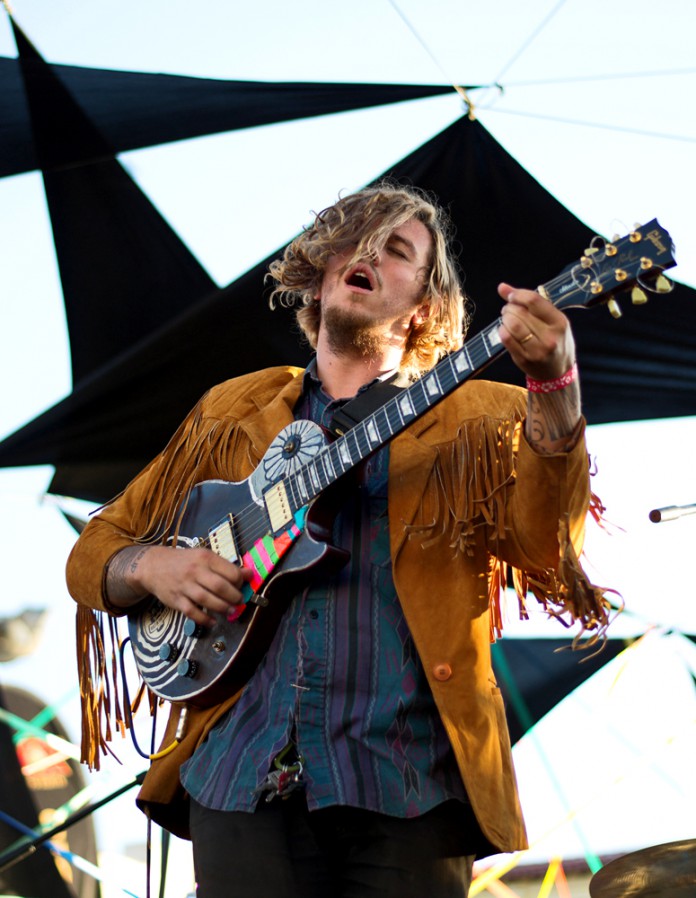 This past weekend, Santa Barbara hosted its annual New Noise Music Conference & Festival, which has in five short years become an SB institution. This festival celebrates the local art and music scene, one that so often gets overlooked amid the tourist industry that fuels much of the Santa Barbara economy. But for one weekend, from Oct. 17 to Oct. 19, all that is cast aside as this festival acknowledges all the great local art, music, and culture that we have around us.

After a weekend full of music industry conferences, concerts, and art exhibits, the festival culminated with the 2nd annual New Noise Block Party on Saturday, Oct. 19., held between State and Anacapa Street. This event, featuring a beer and wine garden of local selections, popular food trucks, arts and crafts, and up-and-coming local and Southern California bands, drew in hundreds of fans to the colorful streamer strewn outdoor exhibition.

Featuring nine bands of varying genres, the New Noise Block Party had a near-constant stream of music. The line-up included Haim, Cayucas, FMLYBND, King City, Grizfolk, Dante Elephante, Erland, Bad Jack, and SKICK. Santa Barbara’s own Erland and the Los Angeles-based Grizfolk were two of the standouts, with fans consistently ranking those among their favorites of the day.

One of the most prominent (and most local) of local bands to perform at the Block Party was the Isla Vista-grown FMLYBND. You might run into this band around IV, as most of their members live and create their music on the 67 block of Sueno. This band seems to truly embody the IV lifestyle — not the raucous partying that some people may think of our community, but the supportive, creative community that sometimes gets forgotten. Despite the spelling (the lack of vowels makes it “easier to google”), this band truly is a family in all sense of the word — a family that just loves making music. FMLYBND, who described itself as some combination of “surf-grunge, butt-prog, and electronic folk,” really ignited the crowd when they performed on Saturday. Their infectious energy and exuberance was absorbed by the crowd, reinvigorating what could have been a tired and dwindling audience and paving the way for the headliners Cayucas and Haim.

Cayucas also put on a very good, albeit more subdued performance, bringing their surf-inspired indie-pop up the Pacific Coast Highway from Santa Monica to entertain the Santa Barbara crowd. But the star of the night was Haim. The most publicized band of the day delivered a raucous performance, and showed just why they have become the new darlings of the rock scene.

Many people attended the Block Party to hear Haim perform, but the rest of the event was just as interesting. As you entered, you were bombarded with the smells of local food truck vendors, which had a wrap-around line for literally the entire day, while those who were mentally strong enough to endure the line taunted you with their delicious food and exclamations of faraway “yums.” Also, among the crowd of food trucks was the convenient and alluring wine and beer garden. While this reporter could only admire from afar, the garden was one of the major draws of the event and had a crowd for the entire day.

But it was more than just music and food; alongside the streets were arts and crafts exhibitions from local artists. The booths had everything from art prints to shirts to handmade tchotchkes. These exhibitions and booths were big hits that not only generated good business for the artists but also promoted the local art scene, which really is the aim of the festival.

The motto of the New Noise Music Conference & Festival is “Listen. Learn. Connect,” and the Block Party really did all of these things, generating new interest for all that was shown throughout the festival. As Sharon Fiori, a resident of Santa Barbara, said, “The New Noise festival really featured all of the artists well, and promoted all of this unknown local talent, and that, I think, is the real goal of the festival.”