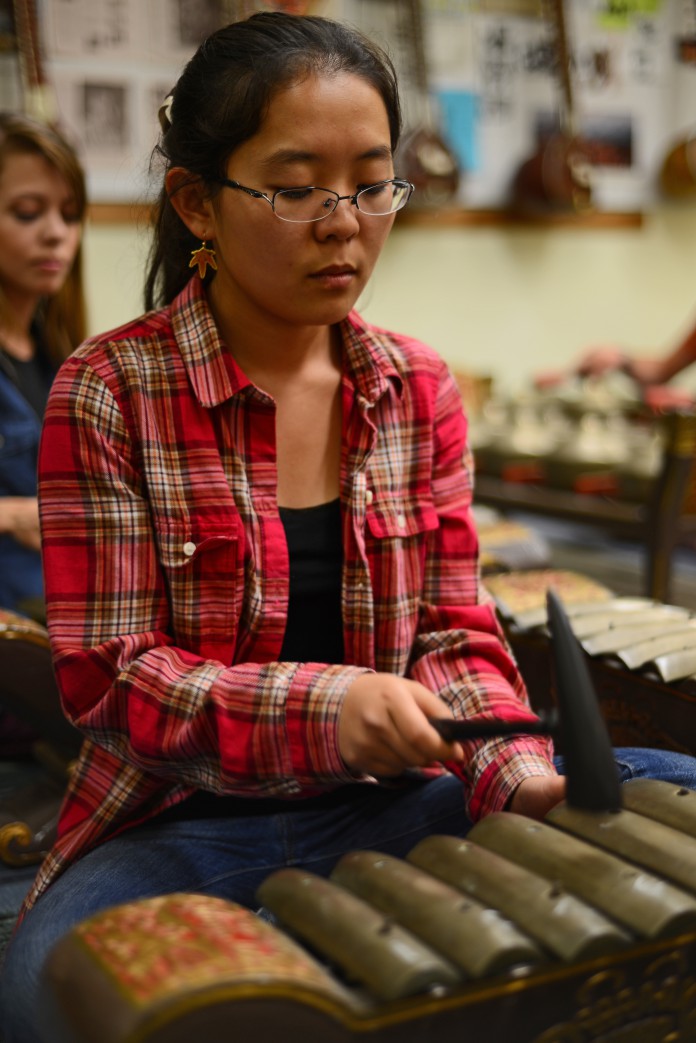 When I entered room 1231 of the music building, I did not expect to be greeted with such welcoming smiles by barefoot bohemians. I was offered delicious tea and a rug to sit on as I observed the gamelan class at the University of California, Santa Barbara and listened to fairy-like tunes coming from unfamiliar instruments.

Gamelan is a term used in Indonesia and Malaysia to refer to the specific kind of music in which bronze objects are being played. While gamelan is appreciated throughout Southeast Asia, it is also a hobby of many UCSB students who come together every Thursday to play music and socialize in a serene and melodic setting.

One of the instruments – the Bonang – is composed of small bronze pots, which are strategically hit with padded mallets as they balance atop tight strings. The instrument itself is quite beautiful and engraved with intricate designs, and I watched in awe as students played the Bonang, along with many other percussion instruments, in synchronicity. If they were stumbling while they played, I never would have noticed, for even their mistakes sounded beautiful.

“You can kind of see it as a certain enthusiasm,” said Donn Howell, gamelan class instructor. “The main thing is that the music is fun to play together [and] the other is to take advantage of performance opportunities that come along every once in a while.”

Howell, who is now retired and continues to teach gamelan at UCSB voluntarily, became interested in the unique-sounding music the summer of 1973, when he travelled to Java as a student at the University of Hawaii. The UH music department had recently acquired a set of gamelan instruments; after three months of practicing, Howell was hooked.

“I heard [the gamelan] play and I decided, ‘I just gotta do this!’” said Howell.

Even after almost 26 years of teaching gamelan music at UCSB, Howell is still inspired by his students. He recalled the friendships that develop from the intimate class of about 11 students, and he hopes that the students will gain a momentum of their own and continue playing gamelan music.

“When you enjoy something, you want to share it, and I think there is a lot of that involved,” said Howell. “[I love] when the group acquires it’s own motivation. It gets a certain critical mass where it just moves. Like right now, I really don’t have to do much [and these students] practice without having grades shoved in their faces.”

Gamelan music is very group-oriented; it is impossible to play it alone. Aviva Milner-Brage, a graduate student of ethnomusicology at UCSB, attributes much of her joy of gamelan to the camaraderie that comes with the class.

“I like how it makes me listen,” said Milner-Brage. “It kind of creates this atmosphere [where] you rely on your fellow musicians for everything. You have to listen to them to know where your part is, so it brings you together in this unique way.”

Milner-Brage has been involved with gamelan at UCSB ever since she began studying here in 2011, and she has continued to take on more responsibilities as she has stayed with the club for over two years.

“The atmosphere is so friendly and comfortable,” said Milner-Brage. “Everyone who is in gamelan [are] good friends.”

The gamelan class meets every Thursday at 5 p.m. and is open to UCSB students, staff, and faculty, as well as community members of all ages.