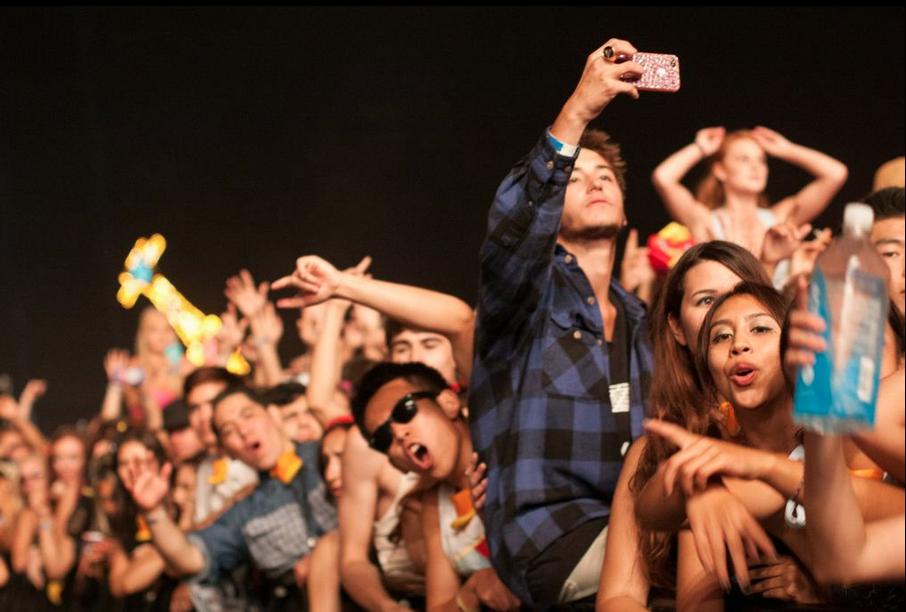 The Los Angeles State Historic Park was a whirlwind of cigarette smoke, heavy bass, fat beats, and electrifying energy on Aug. 3 and 4. Set in the heart of Chinatown, L.A. State Historic Park was home to HARD Summer Music Festival 2013, headlining artists such as Knife Party, Duck Sauce, Dog Blood, Justice, Bassnectar, and Empire of the Sun. With the L.A. skyline setting the city vibes, this electronic event proved that the bass will only get deeper, disco is not dead (and it is bringing funk back with it), the words hip-hop and EDM are synonymous, and that the traffic was well worth the drive.

This year, HARD Summer’s lineup was double the size of last year’s, starting at 12:30 p.m. and ending at midnight. Temperatures were in the mid 70s at daytime and the low 60s at night, allowing festival-goers in various attire reasonable comfort. Although the festival did not officially allow fur boots or candy bracelets, girls clad in booty shorts, pasties, bras, glitter, and fur boots could be spotted next to bros in tanks (or perhaps going shirtless), flip flops, and multi-colored plastic wayfarers. However, this typical rave style was minimal and many others sported the latest urban street wear, consisting of tailored shorts and pants, boots, kicks, dress shoes, flannels, dresses, gold chains, and, for some men, groovy facial hair. Thankfully, only a few could be spotted with feather headdresses and flower headbands.

The festival housed four stages that each gave off certain vibes depending on the line-up: HARD, HARDer, Summer, and Underground. The main stage, HARD Stage, was the destination of headlining artists and usually consisted of more visually stimulating props and performances because it had the largest LED screens and more stage space, allowing artists such as Duck Sauce, Empire of the Sun, and Bassnectar to further enhance the audience’s senses. HARDer Stage was what the name entailed — harder — but not hardstyle itself. This stage provided audiences bass heavy and high energy beats from artists such as RL Grime, Flying Lotus, Dillon Francis, and Flosstradamus. Summer Stage was like a getaway, where those looking for experimental, diverse, or peculiar sounds could wander off to. Even the layout entailed a journey to another part of the festival, as festival-goers would walk over a slight hill toward the city skyline to reach this stage. Artists such as Keys N’ Krates, Brodinski, Breakbot, and Justice (DJ set) performed here. Lastly, the Underground Stage was the only tented stage and had an amazing sound system, allowing artists like Disclosure, Breach, Oliver, and Claude Vonstroke an umbrella to reverberate their funky, deep house bass and flashing lights.

Even with Bondax and Azealia Banks cancelling their performances at HARD Summer, the talent from both emerging and established artists fulfilled the cravings of bass, hip-hop, rap, nu-disco, experimental, synth-pop, house, and electro heads alike. From live sets to DJ sets, and everything outside the box, HARD Summer proved that “EDM” is an overused blanket term for a large array of electronic styles. Keep your ears open for the following artists as they have demonstrated why they are, or will be, shaping the forefront of electronic music.

My day started late, as I had underestimated how congested the freeway and chaotic the parking would be. I arrived at the festival grounds too late to catch the Canadian DJ and producer Ryan Hemsworth’s electronic, abstract hip-hop set, but I did arrive in time for XXYYXX. Seventeen-year-old Marcel Everett set the mood of the Underground Stage with his chill, ambient beats. Marcel played his classic hits from the self-titled album XXYYXX, including “Closer,” “Set It Off,” and “Love Isn’t Made.” Marcel also infused his down-tempo beats and sounds with other works, like Rihanna’s “Cake,” to which the crowd delightfully licked the icing off.

Earlier during the day, even before Hemsworth’s set, Bondax was scheduled to perform at Summer Stage. Bondax is comprised of the teenage DJs and producers Adam Kaye and George Townsend. Best known for their up-beat and funky song “Gold,” this UK garage/house duo creates sounds that mirror their youthfulness. Unfortunately, according to XLR8R.com, Bondax cancelled all but two of their North American tour due to “unforeseen circumstances.”

Although I did not see two sets that I had anticipated, XXYYXX got the ball rolling, and I made my way to watch the trap trio Keys N’ Krates. As I passed HARDer Stage towards Summer, Just Blaze blasted his version of Major Lazer’s “Original Don,” followed by Bingo Player’s “When I Dip.”

Summer Stage felt like a small hip-hop show infused with an electro-house party as the live remix band, Keys N’ Krates, showcased their unique approach to electronic music. Hailing from Ontario, Canada, Keys N’ Krates includes Jr. Flo on turntables, David Matisse on the synthesizer, and Adam Tune on the 808 drum machine. Layering samples with tunes of their own to create clean blends and sharp melodies, the band played originals like “Treat Me Right” and a variety of hip-hop remixes, including Jay-Z’s “I’m A Hustler Baby” and “Dirt Off Your Shoulder.” The three instruments purred as Jr. Flo scratched to Adam’s meticulous drum beats and David pumped the crowd up from his synthesizer, saying, “Who here loves hip-hop?” The crowd bopped their lifted hands to the beat, to which David responded, “Keep those hands up. Here we go!” With build ups and drops created right on stage, Keys N’ Krates reminded the electronic scene that live, hands-on instrumentation and remixing can not only mimic computer programs but also outshine them.

From this show, I made my way to the Soundcloud famous trap/house artist RL Grime. RL Grime is a side project of Henry Steinway, who produces and DJs under the name Clockwork. RL Grime provided the trap heavy elements festival-goers could get crunk to with his originals “Trap On Acid,” “Flood,” and songs from his new EP, “High Beams.” He sampled Flosstradamus’ “Crowd Control,” Kanye West’s “Clique,” DJ Snake’s “Bird Machine,” and Cashmere Cat’s edit of “Do You Like…” by Miguel. Although the bass at HARDer Stage did not do his head-banging drops justice, RL Grime had the hyper crowd swaying, especially when he bumped the remix that first garnered him attention, “Satisfaction” by Benny Benassi.

As I headed toward the food trucks, a bouncing bass line lured me to the Underground Stage instead. A rising talent from the United Kingdom, Duke Dumont was spinning his soulful “Need U 100%,” his single that reached number one on the UK Singles, UK Dance, and Scotland charts just this past year. His intricate yet minimal and repetitive UK garage/house beats had festival goers on their feet as they sang to his songs “Need U 100%” and “The Giver.” As R. Kelly’s “Bump ‘n Grind” began, the crowd sang along, “My minds telling me no. But my body, my body’s telling me yes!” Duke Dumont then seamlessly transitioned to Breach’s “Jack,” as he had skillfully integrated snippets of “Jack” into his set and “Bump ‘n Grind” earlier. The entrancing bass continued to pulse, but I pulled myself away to go feast on tacos and interview Keys N’ Krates.

My interview with Keys N’ Krates ended in time for me to catch the last 15 minutes of Disclosure, a pair of brothers from the UK, Guy Lawrence (22 years old) and Howard Lawrence (19 years old). As I ran toward the Underground Stage, a breathy intro signaled the start of my favorite song of theirs, “What’s in Your Head,” which would be followed by “Confess,” “Running,” and “Help Me Lose My Mind.” The funky and soulful UK garage/house duo performed with live instruments and sang some vocals, sounding nothing short of their 2013 studio album “Settle.” As their set came to an end, one of the Lawrence brothers said, “Thank you, thank you, Los Angeles. We have one more song for you… Before we start this, I just want to know how many of you guys know this one.” With that, the vocals, “Duh duh duh,” teased the packed tent as they cheered with recognition. He teased the crowd once more and yelled, “L.A., if you want this one let me hear you scream!” As the tent roared, “Latch” began to blast, and the Underground Stage danced with delight.

At HARDer, Dog Blood, the side project of Skrillex (Sonny Moore) and Boys Noize (Alexander Ridha), led the festival into the night with their ripping electro-house and acid techno sounds. Playing sped-up remixes of songs such as A$AP Rocky’s “Wild for the Night,” Skrillex yelled to the twerking and break-dancing HARDer crowd, “Let’s see what you’re made of, Los Angeles… Let’s see you guys kick them to death!”

With time to spare, I stayed at HARDer Stage to listen to the hip-hop ridden electro jams of TNGHT. TNGHT officially formed in 2012 by the production and DJ duo Hudson Mohawke (Ross Birchard) and Lunice. As Hudson Mohawke produces for Kanye West’s record label G.O.O.D. Music, TNGHT dropped the tracks that they helped co-produce, such as Kanye West’s “Blood on the Leaves” and “Higher Ground.” Hudson Mohawke’s “Lambo Furnace,” as well as TNGHT’s originals “Goooo” and “Bugg’n,” were also played. The combination of hip-hop instrumentals and gripping electro tunes strayed from classic trap sounds and added a haunting and eerie vibe to the head banging set.

I then made my way to HARD Stage to party to the nu-disco, garage, and house tracks of Duck Sauce. Duck Sauce is made up of DJs Armand Van Helden and A-Trak and is best known for their song “Barbara Streisand,” which charted number one in 2010 on Austria Top 40, Belgian’s Ultratop 40 and 50 and Netherland’s Mega Top 50. Duck bills were thrown into the crowd and an enormous, inflated duck took over the stage. With choppy disco vibes, Helden and A-Trak offered celebratory sounds with songs like “It’s You,” as they jumped around in gold track suits. The growls of “Big Bad Wolf” continued the party and festival-goers howled into the night.

After thrashing around at the main stage, I made my way back to the Underground Stage, where the futuristic and funky disco duo Oliver was making everyone move their bodies to their versions of Boys Noize’s “Starwin” and Laurent Wolf’s “The Crow.” Oliver was formed in L.A. by Oliver “Oligee” Goldstein and Vaughn “U-Tern” Oliver and has just released their second EP, “Mechanical,” through Fool’s Gold. As groovy as the set was, I had to end my night a little early to beat the crowds and traffic.

I exited the festival grounds, and like the perfect exit song, Knife Party played Showtek’s remix of “City of Dreams,” by Alesso and Dirty South, and L.A. felt and looked just like that — a city of dreams.