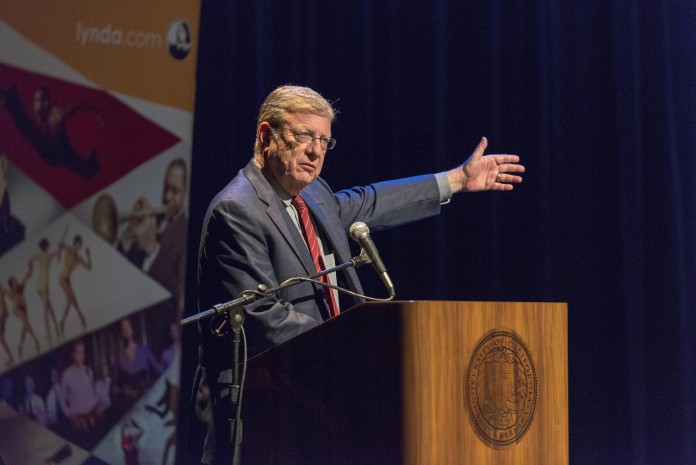 On the evening of May 15, the University of California, Santa Barbara’s Arts and Lectures and the Interdisciplinary Humanities Center (IHC) hosted the Arthur N. Rupe Great Debate. The discussion was among eminent professors and attorneys about the pragmatic, moral, and legal ramifications of drone warfare.

Drone warfare is “one of the most prolific issues up for debate today,” said one of the participants, Mary Ellen O’Connell, in her opening remark. O’Connell, a research professor of international dispute resolution at the University of Notre Dame, has been studying the use of drones since 2002 and was the panelist who opposed the use of lethal force with drones.

“International law is the relevant law for the debate,” she said. “Outside of war zones there is no tolerance for collateral.” Furthermore, “inexpert discussion is used to validate the law,” resulting in a “global war concoction” for justifying drone strikes.

Another panelist, David Cole, a professor at Georgetown University Law Center, began with a powerful example of a drone’s potential pragmatism. He stated that in 2000, a drone sighted a figure matching the description of Osama bin Laden. If the drone were armed with hellfire missiles, the harrowing events of Sept. 11, 2001 may have been prevented. However, Cole went on to express a few reservations regarding the use of drones for lethal force. His main criticism rested upon the secrecy involved in carrying out drone strikes. “If it is not transparent, it is against the law,” he said.

Cole’s critique is aimed at the Obama administration’s mode of operation regarding drones. According to his article “What’s Wrong With Obama’s Drone Policy,” the Justice Department’s “white paper,” the document that defends the legality of the U.S. use of drones, “maintains that the president can kill an American citizen who is not a member of Al Qaeda, not on a battlefield, not participating in hostilities and not engaged in or planning an attack against the United States when he is killed.”

“Surely if the president claims the power to kill any of us without trail, we have a right to know the standards and procedures he will use,” Cole said.

Avery Plaw, the third participant and an associate professor of political science at the University of Massachusetts, Dartmouth advocated the use of drones in war, assuming “reasonable oversight.”

“The use of drones has been tactfully effective,” but a “consensual compromise” from the political territory involved is essential in adhering to international law, he said.

Plaw cited the notion of proportionality found in Michael Walzer’s book entitled “Just and Unjust Wars: A Moral Argument with Historical Illustrations,” as a cornerstone for his argument. Walzer states that proportionality, in just war theory, is: “to weigh ‘the mischief done,’ which presumably means not only the immediate harm to individuals but also any injury to the permanent interests of mankind, against the contribution that mischief makes to the end of victory.” Plaw is arguing that the end, preventing mass destruction due to terrorism, justifies the controversial means—a utilitarian argument of sorts.

“The nature of conflict is changing,” said the moderator Jeff Greenfield in the concluding remarks, reminding the audience that we are amidst a drastic change in the method of warfare.

Technological advances, which have enabled catastrophic damage at the push of a button, paired with the nature of terrorism—namely the intentional and devastating murder of innocent lives with guerrilla style tactics—have amplified the urgency of defense, but the question at hand is: to what extent does the end justify the means, and are those means even legally possible, given current international law? This was the question addressed in this year’s Arthur N. Rupe Great Debate, contributing to a further progression in the discussion and resolution of this immensely important issue.