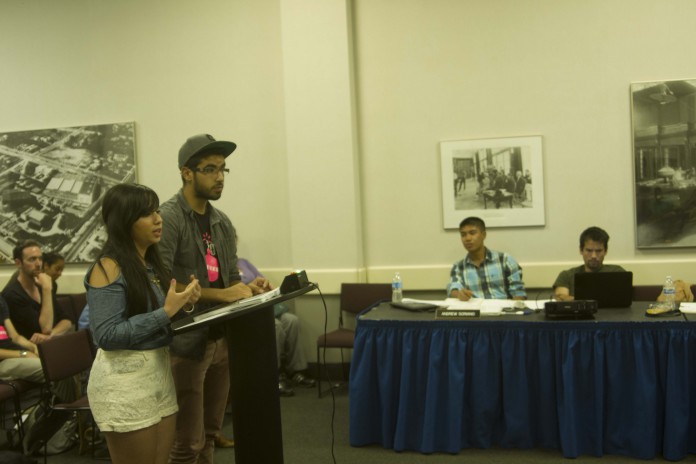 After weeks of meetings and hours of discussion, Associated Students Senate created and finalized the AS Budget for 2013-2014 at 6:02 a.m. on Thursday, May 26, 11.5 hours after their meeting started.

The budget, which goes through Finance Board and AS President before being finalized by Senate, was tabled from previous weeks and special meetings were set up for Boards, Committees, and Commissions (BCCs) to voice their opinions.

Two of the groups that were most vocal about funding were Queer Commission and Herstory, a yearly publication created by Womyn’s Commission.

“A few years ago we had $70,000 and that got cut in half with budget cuts, so last year’s budget was $35,000,” said Chris Buck, a representative from Queer Commission. “This year we have $31,000 and we’ve been cutting things the last few years, just making things more efficient, trying not to lose events, trying not to lose being able to have resources for our community. There’s consistent budget cuts and if we keep seeing them, soon we’re not going to have the money to sustain the community we’d like to have on this campus and the safety we’d like to have.”

After all the funding was allocated to different BCCs, Senate had approximately $3,000 left over to disperse to whichever BCCs they saw fit. About $1,000 of that was allocated to Queer Commission and $100 to Herstory.

“This is a space for women, for feminism and equality to come together and show expression through forms of art,” said Womyn’s Commission Co-Chair Mariam Agazaryan. “I know [the Herstory budget] got slashed in half and I know a lot of other BCCs got their budgets cut…but I don’t think it’s fair that it’s being cut, we’re trying to do the best we can.”

Despite being able to create its own budget, Senate mostly followed the budget President Sophia Armen had created, occasionally changing it themselves or taking Finance Board’s budget into account. The budget put forth by Finance Board, however, was created prior to AS Elections, and so it did not take into account two new lock-in fees from The Bottom Line and Commission on Student Well-Being.

Finally, although $10.5 million was distributed, many BCCs saw drastic funding cuts from both their current budget and their requested budget.

After the budget was finalized, a motion was made to reconsider Internal Vice President Mayra Segovia’s decision regarding the 12-11-1 vote on “A Resolution to Divest from Companies that Profit from the Military Occupation of Palestine.”

The vote was contested as a result of a confusion in AS Legal Code, but the motion to reconsider was ultimately voted down, and the decision on the resolution remained the same.

Bills to update a variety of legal codes for some BCCs including all the executive positions, Committee on Committees, and AS Food Bank, among others, were passed right before the meeting adjourned at 7 a.m.

The next meeting on Wednesday, May 22, will be a transition meeting where all newly-elected senators and officers will be sworn in to begin their new term.