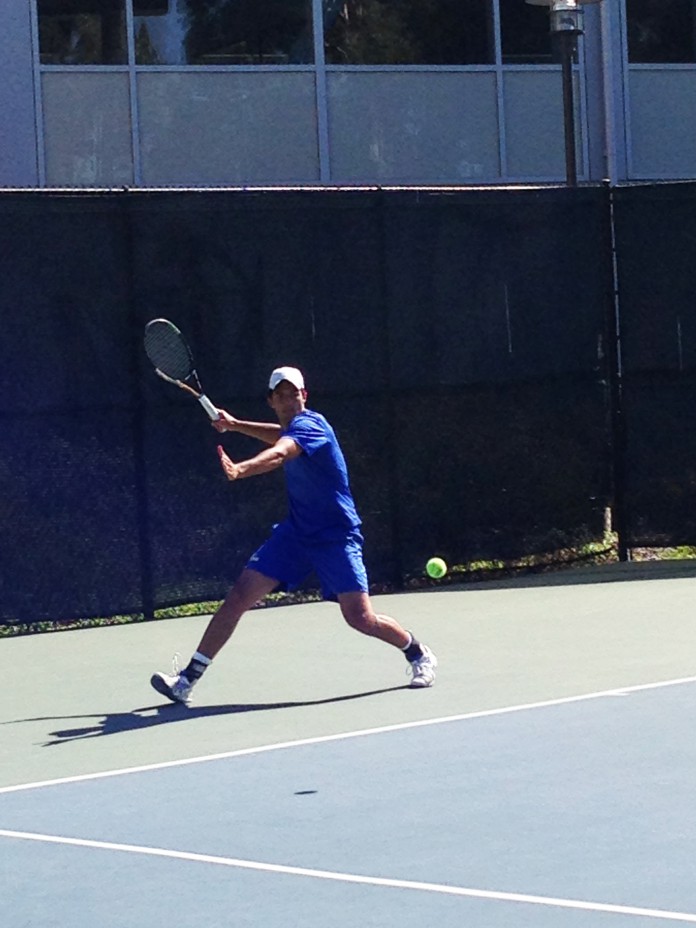 On Wednesday, April 17, the University of California, Santa Barbara mens’ tennis team faced off against the Warriors of Hawaii on the Recreation Center Courts.

The Gauchos’ doubles teams started the match with a spark. The number three duo of second-years Ziad Sultan and Alexander Gryaznov easily defeated the Hawaiian number three duo 8-0. The entire match was full of energy, as cheering from Sultan could be heard across the entire facility.

The number two pair consisting of freshman Andrew Riminton and sophomore Miles Seemann finished their match quickly with an 8-1 win over the Warriors’ number two pair.

The only doubles loss came at number one, when the team of fourth-year Benjamin Recknagel and second-year Axel Bouillin was forced to retire the match despite being up 5-4 in the eight game set. The forfeit was a result of Recknagel suffering a leg injury in one of the early games that gave him problems later on. Despite this match, the Gauchos still acquired the one and only doubles team point.

The injury-stricken Gauchos, losing fourth-years Mbonisi Ndimande and Benjamin Recknagel, were forced to bump all of their singles players up two spots in the line-up. This proved to be detrimental for the UCSB team.

Number two doubles Ziad Sultan carried his energy and momentum from his doubles match over to his singles, defeating Hawaii’s Jared Spiker 6-3, 6-1.

Number four singles player for the Gauchos, Sasha Gryaznov, couldn’t quite carry the same momentum his doubles partner did into his match, and despite losing the first set just 7-6, lost the control in the second and fell 6-0 to Dmytro Kovalyov.

Number five Miles Seemann lost a three set match, 2-6, 6-0, 6-3 to Nils Schuhmann, but Jacob Johnson of UCSB was able to tie up the team match at 3-3 with his two set win over Danilo Casanova.

The deciding match would be at number three between UCSB’s Sahsa Gryaznov and Hawaii’s Chas Okamoto. This seesaw match saw Gryaznov lose the first, win the second, and the match go into a 6-6 tie breaker in the third match. Heartbreakingly, Gryaznov lost in the tie breaker due to a double fault on the last point. Okatomo won the match 6-3, 4-6, 7-6 (7).

The loss puts the Gauchos at 2-3 when playing Big West opponents, and they are now in fifth place in the conference. If both Hawaii and UCSB stay put in the standings, the two will face off in the first round of the Big West tournament at Indian Wells next week.

Coach Marty Davis told the UCSB Gauchos Athletics website, “When you’re not playing with your top two guys, it’s going to be a long day. I thought we did pretty well and obviously put ourselves in a position where we should win and didn’t.”

The Gauchos finish the day at 9-12 and will play their last match against Cal Poly on Saturday, April 20, at 1 p.m. at the Rec Cen Courts.