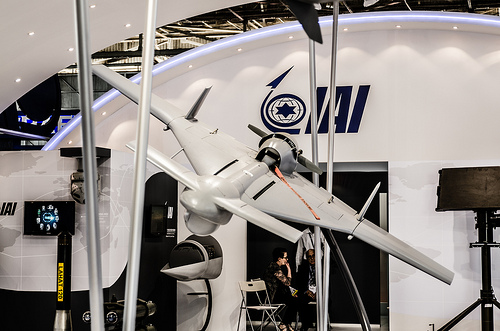 Students, community members, and professors crowded into the sixth floor of the Humanities and Social Sciences building on Feb. 26 to discuss drone warfare at the Life in the Age of Drones symposium. Speakers included the Canada Research Chair in Technology Arthur Kroker, University of California Institute for Research in the Arts Co-director Marko Pelijhan, and UC Santa Barbara Center for Information Technology and Society director Lisa Parks, among others.

Drones have recently gained media attention as a result of their use in the wars in the Middle East and a recent investigation into the number of civilian deaths by drone attacks. The recent media attention has given the impression that drones are a modern invention, new to the world and its 21st century needs. However, Pelijhan said this is not the case, and that drones have been in use since before the second world war.

“The Radioplane company was in Van Nuys and they built 15,000 of these unmanned aerial vehicles,” said Pelijhan. “Over from Point Mugu, there’s a graveyard of technology on the seabed…of all kinds of unmanned systems from 1945 on.”

Addressing the issue takes multiple forms. In the political sphere, the Unmanned Systems Caucus recently formed in Washington and CODEPINK protested at Senators’ and Congressmens’ homes. People outside of politics are also involved in the debate. Do-it-yourself drone enthusiasts use store-bought drones similar to remote-controlled toy helicopters for personal enjoyment. One user demonstrated the potential good a drone could do as his drone, which he bought at a mall, transported and delivered individual cupcakes.

While drones of such individual-use design rarely, if ever, pose a threat, the speakers stressed the potential for military observation and assassination drones to be abused. Arthur Kroker said the scenes presented in movies like Terminator may not be simply fiction.

“We’re increasingly living in the age of this technological realization of cinematic culture,” said Kroker. “For example, what was once visualized so brilliantly in Battlestar Galactica, with its mythic warfare between triumphant cylon drones…and a band of always beleaguered, yet highly adaptive human survivors, is for myself, in retrospect at least, a visionary experimental staging of a contemporary technological reality.”

Despite the potential for concern, the rest of the speakers chose to focus on modern views and uses of drones. Independent filmmaker Casey Johnson and Nancy Mancias, the campaign organizer for CODEPINK, both individually explored the media attention toward drone use and its appearance on sites like Instagram, Pinterest, and Twitter, as well as their representation in movies and video. Johnson screened three clips from his short film, “Unmanned,” which portrays a soldier who uses drone technology to fight combatants in other countries while still living comfortably in the suburbs. The film reveals that though the physical effort may be minimal, there is still great mental and psychological pressure placed on the drone operators.

“I feel like some of the most profound war films,” said Johnson, “are those that restrain themselves from being a mouthpiece, a soapbox, and just bring you into the human experience…The New York Times came out with an article that in fact the earlier reports from the Air Force are not totally correct and that this is ‘job stress’ rather than actual PTSD. New reports have come out that drone operators are getting a much higher rate of PTSD, maybe even as much as troops that are on the ground.”

The troops operating the drones, with no ability to interact with or directly observe those they watch from the drones’ camera, rely on cues and information from troops present at the site. Lisa Parks argues that this results in a targeting of specific groups of people in the Middle East and elsewhere.

“That the drone is now being heralded by some as a technology of humane warfare is not only deeply troubling but perverse,” said Parks. “As drone use supplements the dark side to the war on terror…it has generated a new disenfranchised class of targeted people…simply because they live in areas where terrorists suspects may operate.”

Removing humans from the battle, using joysticks and buttons similar to an Xbox controller, and having humans be nothing but dots on a computer screen questions how the U.S. and the rest of the world sees war and war casualties.

“Even though drones are automated systems,” said Parks, “the aerial views they acquire and the bombs they drop are received by humans at both ends. Because of this, we can’t afford not to respond to and deliberate this new form of warfare.”