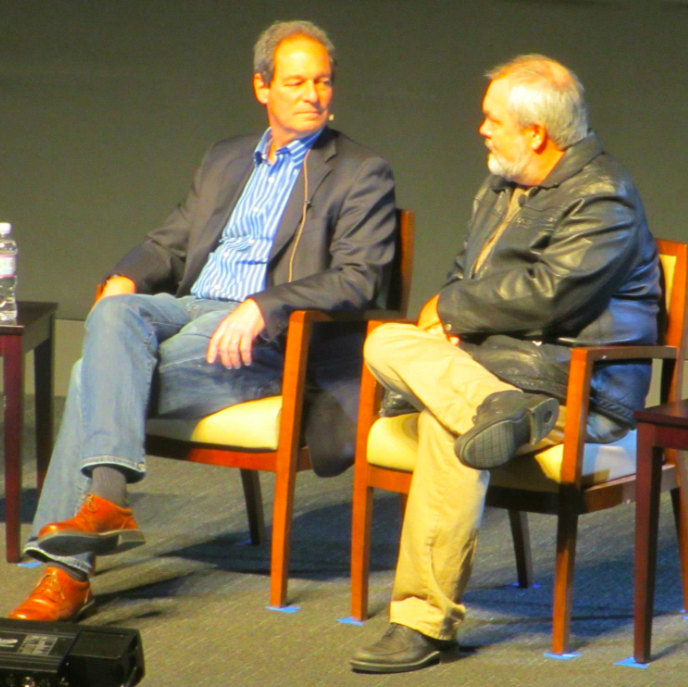 Pollock Theater was a room full of dropped jaws and wide-open eyes on Feb. 28 at University of California Santa Barbara’s screening of the Sundance Film Festival hit “Hard Candy.” After the psychological mystery haunted audiences Hitchcock-style, crowds were treated to a Q&A with screenwriter Brian Nelson and producer Richard Hutton as part of the Carsey-Wolf Center’s “Script to Screen” series.

In the role that put her on Hollywood’s radar, Ellen Page was a tour-de-force as a calculated, scheming 14-year-old with a wicked plan. In combination with Patrick Wilson’s subtle and spot-on performance of the inscrutable 32-year-old photographer she tortures, the film is a potent mix of robust acting and razor-sharp writing that sticks with you like a scab after a stab. It cuts you like a knife.

As movie viewers, we’re conditioned to focus on a protagonist to sympathize with, or at least a character who we can relate to and therefore root for. “Hard Candy,” however, had viewers wrestling with just who that is. The young girl who found a man on a chat room? Or the man who brought her home and fixed her screw-drivers? Early in the film, we were exposed to the two sides of Wilson and Page’s characters, which left us even more questioning of their motives. The more we learned, the less we knew.

It’s this mystique of “Hard Candy” that kept crowds on the edges of their seats. We watched the plot spiral far out of the control of our own predictions, leaving us staring in shock.

“Candy” takes place almost completely in three rooms of Jeff Kohlver’s (Wilson) Los Angeles home. Nelson said that his experience with the stage made it possible for so much to happen in such a small place.

“One house feels like a limited thing, but on a stage, I only have one stage…so [I asked myself] what is every possible visual strategy I can use to pull this off?” said Nelson.

Hutton and Nelson explained that “Candy’s” premise was inspired by Hitchcock’s 1943 “Shadow of a Doubt,” as well as the disturbing trend where underage girls in Japan who would seduce men in order to take them upstairs, where they would beat up and rob them.

They also raved about the two leads’ powerful acting.

“I cannot give enough props to Patrick for not just his craft, but also his daring,” said Nelson. “His hands were turning purple [when he was tied to a table]. That’s not makeup.”

Nelson’s stellar job with “Candy” set a precedent of sorts for his future work.

“Since ‘Hard Candy,’ I have been approached for five things,” said Nelson. “Producers typically call me up now because they are looking for a story that either involves a psychopathic killer, a brilliant teenage girl, subversive sexuality, an Internet-based thriller, or, most of all, contained [sets]. We only have so many sets, we only have so much money, and this is a guy who can make that work.”