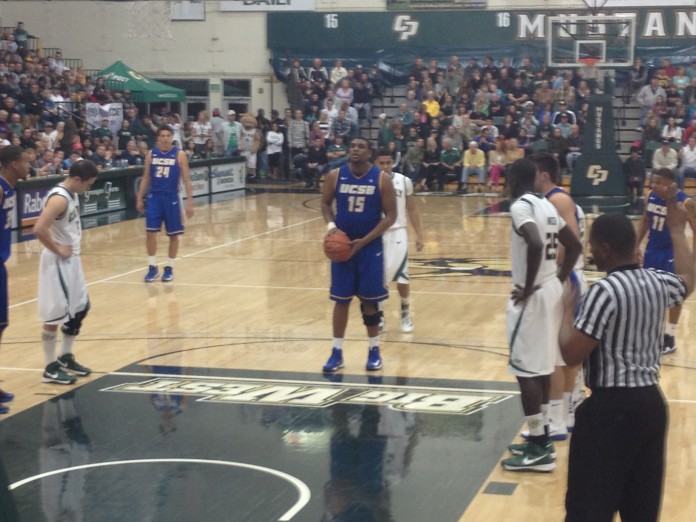 The University of California, Santa Barbara men’s basketball team lost to bitter rivals Cal Polytechnic State University 67-49 on Saturday, Feb.16, ending the Gauchos’ six-game winning streak over the Mustangs. The last loss the Gauchos’ men’s basketball team suffered at the hands of the Mustangs was all the way back in 2010. The Gauchos are now 8-16 overall and 4-9 in the Big West Conference.

Cal Poly was lead by sharpshooting fourth-year guard Dylan Rover. Rover scored 23 points in the game and hit an astonishing seven three-pointers. Even though the Gauchos outshot the Mustangs 43.5 percent to 35 percent, the Mustangs had 14 more field goal attempts over the Gauchos via turnovers and offensive rebounding. This, along with the Mustangs hitting a remarkable 11 three-pointers, proved way too much for the road-weary Gauchos, who are just 2-11 in away games.

To make matters worse, third-year guard and team leader Kyle Boswell was taken out of the game as a result of a hard screen that injured his left shoulder. Boswell sat out most of the second half and did not return.

The only bright side to the horrific loss was “Big Al” Williams’ presence in the paint. Second-year Alan Williams racked up 24 points and 17 rebounds. The only other Gaucho to score in double digits was first-year Michael Bryson with 10 points. Besides that, points were extremely hard to come by on that night.

Their next game will be at UC Riverside on Wednesday, Feb. 20, and the Gauchos’ next home game will be on Saturday, Feb. 23, against California State University, Sacramento.