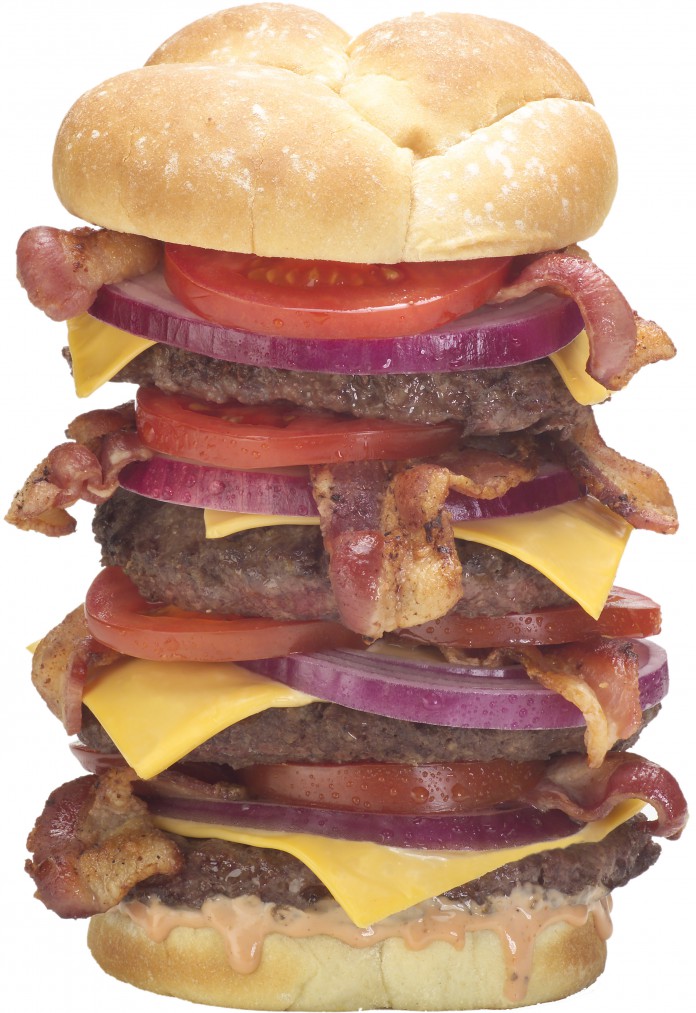 No, this isn’t a headline from “The Onion.” We’re being serious. John Alleman, unofficial spokesperson for the Las Vegas restaurant Heart Attack Grill, died of a massive heart attack on Feb. 11. As if this crushing irony wasn’t enough, the 52-year-old is actually the second spokesperson for the Heart Attack Grill to die within a year. In March of 2011, 575-pound Blair River died of pneumonia complicated by his weight at the age of 29. Those who have never heard of the restaurant probably have this pressing question in mind:

What the hell is going on at that place?

Founded originally in Chandler, Arizona, by Jon Basso, Heart Attack Grill has been dedicated to serving the most grotesquely unhealthy food on the market since 2005. Upon entering the hospital-themed restaurant, customers are given hospital gowns to wear and are referred to as “patients.” Then, the “nurses,” waitresses in skimpy costumes, come around and take the orders. Patients are examined with a stethoscope before eating, and if you weigh over 350 pounds and are willing to prove it to the entire restaurant on the scale before ordering, you eat for free.

The menu includes the Single, Double, Triple, or Quadruple Bypass Burger, featuring an increasing number of half-pound patties, piles of bacon and cheese, a whole tomato, half an onion and lard-coated buns. On the side are Flatline Fries cooked in pure lard, beer, tequila, Mexican Coke, and cigarettes, among other items. To give an example of the horrifying decadence of these meals, the Quadruple Bypass Burger broke the world record for the most calorific burger on the planet on April 13, 2012. According to the official Guinness estimate, the 3-pound, 3-ounce burger packs a walloping 9,982 calories. I repeat: nine thousand, nine hundred eighty-two calories. The daily recommended amount for a healthy adult to eat in an entire day is two thousand calories.

So how can Heart Attack Grill justify itself?

You may be surprised to find that founder Jon Basso actually used to own a fitness center and a Jenny Craig franchise. As reported by Lauren Effron of ABC News, Basso understands the danger of serving such unhealthy foods. As spoken by Basso himself, “The only way what I’m doing would be immoral would be if I were to market it as healthy by throwing a cute little side salad on the menu…The Heart Attack Grill is the most moral restaurant on the planet Earth because we are absolutely here to make a statement about obesity, about coronary issues, about death and dying and all those things that are prevalent in the society.”

Basso has called his eatery a “soap box” that he uses to spread awareness about the poor dietary habits of Americans nationwide. However, Heart Attack Grill has still drawn the concern of many health professionals, including Jason Belland, executive director of the Las Vegas branch of the American Heart Association. In an interview with the Los Angeles Times, Belland told reporter John M. Glionna, “The American Heart Association recently defined the ideal cardiovascular health and found that less than 1 percent of Americans fell into that category. Still, in surveys, more than 40 percent believe they are heart healthy. These are people who say ‘I know I’m overweight and I smoke,’ but continue to do it. They think ‘I’m OK, but they’re not OK.”

To Belland, this restaurant is a danger to a public that is troublingly unaware of just how unhealthy it really is. His argument is strengthened by the fact that these two spokespersons are not the only ones to have health complications as a result of eating Basso’s monstrous creations. In Feb. 2012, a man was hospitalized after exhibiting the symptoms of a heart attack while eating a Triple Bypass Burger. In April, another woman was hospitalized in the same situation.

Heart Attack Grill is an interesting case. Basso is clear that his intentions are to alert the public to the sad state of nutrition in the United States, not to give people massive coronaries. Unfortunately, this is has happened multiple times in the restaurant’s brief history. Basso is aware of the tragedy of his spokesperson and close friend’s death has caused, but he believes that his eatery is still doing its job. In his own words, “[Alleman’s] death serves as another lesson for people…I often say I serve burgers and fries, and I also serve food for thought.”