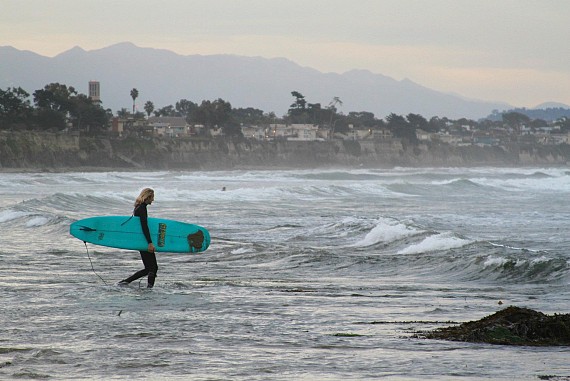 Members of the Environmental Affairs Board along with enthusiastic surfers braved the chilly waters at Campus Point on Wed., April 25 to voice their disapproval of the future development of the coastline.

The event, the first of what EAB hopes to be many more, consisted of a silent march through campus until they congregated at the beach. The hour-long affair was largely put together by fourth-year environmental studies major Cristina Cook, who welcomed those in attendance and introduced the Outreach Chair to speak on behalf of the Gaviota Conservancy.

The organization, located in the heart of Santa Barbara, formed in response to land developers’ continual interest in expanding these areas. According to the Conservancy’s website, the ongoing expansion will have devastating effects on the coastline, including infertile land, reduced beach access and infinite damage to coastal watersheds and marine ecosystems.

Steve Forcell, outreach chair for the Gaviota Conservancy, spoke on behalf of the organization, urging students to get involved in protecting what he says is 50 percent of the remaining rural coastline.

“The Gaviota Coast is a treasure we are trying to preserve,” said Forcell. “We are always fighting to keep the coast as free of development as possible. A lot of people drive up the coast, see how beautiful it is, but they really don’t know anything about it. Our ultimate goal is to prevent any urbanization of this coastline.”

Forcell admits that this possibility is becoming more unrealistic by the minute. However, the Gaviota Conservancy is determined to safeguard as much of the coast as possible.

“We’re not as naive as they think. But we want to work with the landowners and county to try to limit the growth as much as possible,” said Forcell.

The Environmental Affairs Board spearheaded not only the Paddle Out, but also an array of other eco-friendly events to encourage student involvement in such pressing issues of the decade. These outreach groups are remaining optimistic about future endeavors. During the Paddle Out, a surge of students took the initiative to sign up and volunteer for other coastline awareness events.

“The point of today’s event is mainly to get out and have some fun in the water, all while raising awareness about the need to protect the Gaviota coast, which stretches from the northern part of Santa Barbara to Gaviota,” said Cook, also adding that if the urbanizing does indeed take place, Californians will lose their last bit of protected coastline. “If we do not do anything about this, the Santa Barbara coastline will eventually resemble the one in Los Angeles.”

Cook suggested more Paddle Outs in the future are likely. Most students showed up to the event prepared in wetsuit attire and keen on getting wet. Third-year sociology major Sarah Martinez expressed her yearning to participate in her first ever Paddle Out.

“I’m really excited to be out here today,” said Martinez. “The weather may not be ideal, but I think the cause is what’s important. By being a part of something like this, we’re taking a stance against those who do not understand the true value of the coastline.”