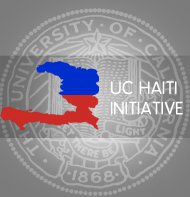 The University of California Haiti Initiative presented the film “Haiti: Where Did the Money Go?” on Wed., April 11, followed by a question and answer session with the filmmaker, Michele Mitchell.

UCHI, founded by students and University of California faculty, functions as a collaboration between students on all 10 UC campuses and the State University of Haiti and is located in the capital city Port-au-Prince, Haiti. Through these connections, UCHI strives to share UC resources with Haitian students who are finding ways to rebuild their country.

As made apparent in “Haiti: Where Did the Money Go?,” the extensive amount of funding and aid accumulated by foreign countries, especially the United States, contributed very little to any effective relief effort after the January 2010 earthquake.

Mitchell’s curiosity about the misuse of the aid money was motivation to begin filming of her documentary later that year in November, just as Hurricane Tomas began to threaten the encampments of displaced Haitian citizens. The destitution seen in the camps of displaced persons became expressively clear as the hurricane swept through. When non-governmental organizations like the Red Cross strongly encouraged Haitians to evacuate the area, their lack of cognizance of the truth of the situation also emerged.

“I saw in real time the critical mistakes made by the relief effort,” said Mitchell. “There was very little accounting for what had gone wrong.”

Conversely, UCHI aims to use different, more effective means to compensate for NGO’s malfunctioning methods of relief. Documentary screenings are just one kind of event that UCHI hosts to raise student awareness about the organization, as well as the reality of Haiti’s situation.
Established on all 10 UC campuses in 2010, UCHI networks between universities through its separate categories in health, economy, engineering, agronomy and law and social justice to successfully perform as a whole organization.

Sierra Griffin, the UCSB chapter director of UCHI, explained that Haitian students at Université d’Etat d’Haïti are developing sustainable projects that meet the needs of their communities. Through this organization, they are able to reach out to the UCs to receive the resources required to realize their enterprises. In one case, the Haitian students used UC resources to establish different ways of sharing clean water within communities. Griffin, who took a trip to Haiti in August 2011, described the incredibly positive and enthusiastic attitudes of Haitian students she met through the partnership created between UEH and the UCs.

“Not only is this an amazing opportunity for Haitian students to work with faculty and have access to resources they wouldn’t have had access to, but [UC students] are learning too,” said Griffin.

Co-founder and Steering Committee Chair of UCHI Nicolás Pascal guides the organization in determining and completing objectives, as well as managing core fundraising to make their projects and programs possible. He believes that one of the fundamental messages of Mitchell’s film is for people to remain accountable for their actions in terms of international aid.

Acknowledging the abilities of other cultures and encouraging their utilization is a vital aspect of humanitarian work that UCHI accentuates in its goals.

“With patience and the right orientation, such partnerships can help local talent on their way to national change,” said Pascal, regarding the sustainable projects of UEH students as a model of possibilities available to many growing or rebuilding communities across the globe.

By forming a cooperative relationship with UEH students, following their lead in the direction of their projects, and maintaining responsibility for donated funds and resources, UCHI has undertaken a unique kind of international development that pushes for long-term solutions to global issues.