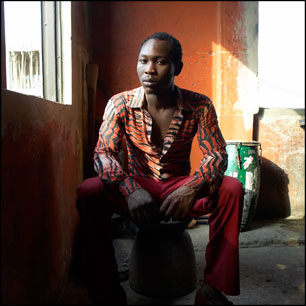 I yearn to see the great artists of yore perform live. Perhaps I’m just overly nostalgic, or maybe I’m just so pessimistic about my generation that I feel that modern artists cannot compete, but most of my favorite artists have long since past. I have long since come to terms with the fact that this want is impossible. Or so I thought. A performing hologram like Coachella’s recent Tupac incarnation wasn’t even necessary to change my mind, but last Monday evening at Campbell Hall, Seun Kuti did.

On April 15, University of California Santa Barbara’s Arts & Lectures Program hosted the hotly anticipated performers Seun Kuti and the Egypt 80. The musically prodigious Seun is one of the sons of the late revolutionary African musician Fela Kuti. However, during the performance it became apparent to me that the demarcation of where Fela’s influence on the music and performance style ended and Seun’s began was indiscernible. To be honest, I felt like I was like watching the legendary Fela himself perform on stage that night.

Though not recognized by many major music publications during his time, Fela was one of the best artists of the 20th century. A Nigerian native responsible for the creation of the Afrobeat genre, Fela was multifaceted in his approach, yet singular in his execution. Exceeding the limits of a single title, he was an activist, musician and a marijuana enthusiast, all wrapped into one. One music critic went so far as to describe him as an amalgamation of Che Guevara and Bob Marley.

Like Guevara, Fela was equally dogmatic in the practice of his philosophy, speaking against various corrupt African governments in spite of consequences such as unlawful imprisonment, torture and the eventual murder of his mother by the Nigerian military. At one point, Fela was so disenfranchised by the Nigerian government that he started his own political party, and declared his living compound an independent republic, free from Nigerian authority.

However, Fela’s music was just as, if not more, noteworthy as his activism. Much in the same way, Fela was a hybrid of different icons; his music was a symbiosis of different styles that incorporated jazz, funk, psychedelia and traditional African music into one solid groove: Afrobeat. To top it all off, Fela also had the showmanship of an Ian Curtis with soul, going into musically induced trances onstage that were punctuated by spastic, seemingly uncontrollable dance moves.

Even though Fela died of AIDS in 1997, after Monday’s performance on Monday, I feel that he and his influence have not entirely left this world.

Justin Flint, a Santa Barbara City College student who was in attendance for Monday’s performance, profoundly reflected on Fela’s posthumous rise in infamy.

“Fela has become more than just a figure, but a position much like the Dali Lama. And Seun Kuti is the most recent incarnation,” said Flint.

The striking similarities between Fela and Seun go far beyond physical resemblance. Not only does Seun play the same instrument and tour with the same backing band as his father, he also shares the same musical prowess, on-stage antics and subversive political ideology.

During the performance of the song “Rise,” off of his album of the same name, Seun advocates in Pidgin vernacular for African self-determination, urging Africans to “rise against all the African rulers” because “Africa has no leaders, only rulers.”

The crowd that night reflected a variety of different demographics and age groups, ranging from the average college student to wealthy retirees. Despite this generational and socioeconomic gap, Seun’s performance captured the same ethos of his father, penetrating the cultural divides to expose the crowd’s collective humanity. The Campbell Hall venue is meant for a seated audience, which wasn’t at all fitting for a genre of music that naturally induces dancing. However, by the end of the show, Seun had everyone out of his or her seat, moved by the power of Seun (and Fela’s) music. Some audience members even jumped on stage to dance with the band.

This enthusiastic response was a testament to Seun’s full incarnation of his father. Seun also possesses Fela’s greatest skill: unifying people through music. Seun, better than any artistic recreation like Coachella’s recent holographic Tupac, is the real deal. He has become Fela incarnate; he continues to live through Seun in musical performance.