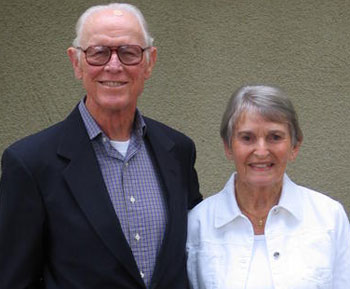 Walter J. Mead, economics professor emeritus at University of California Santa Barbara, and his wife, Thelma, recently made a donation of $1 million to UCSB to establish an endowed chair in the Department of Economics.

The new chair is named after Alec P. Alexander, a former professor of economics at UCSB, who died in 2008. He and his wife, Eleanore, were good friends of the Meads. This is the second gift of this proportion that the Meads have made to the campus, the first of which was used to establish the Walter J. Mead chair in economics in 2008.

“It’ll be a great boon. It’s very difficult to recruit at the international level and that’ll make it definitely easier,” said H.E. Frech, III, who has been an economics professor at UCSB since 1973 and was a colleague of both Mead and Alexander. “It’ll directly affect graduate students because the chair could use some of that money to support them, send them on trips and hire them to do research directly, but the main thing for undergraduates is to attract an internationally well-known person we wouldn’t otherwise be able to attract.”

UCSB’s Department of Economics is currently ranked at 27 out of the 114 top U.S. economics departments, according to Research Papers in Economics rankings, a database created to spread information and research about economics and related sciences. The university as a whole is ranked in the top 10 percent of economic institutions worldwide as of March 2012.

“UC Santa Barbara is immensely grateful to Walter and Thelma Mead for their generous philanthropy to establish the Alec P. Alexander Chair,” said UCSB Chancellor Henry T. Yang in a press release. “Their extraordinary generosity honors our esteemed colleague Alec Alexander, who passed away in 2008, and builds on their vision to further strengthen our outstanding Department of Economics. Walter’s world-renowned contributions as an emeritus professor of resource economics have been fundamental in the growth of economics at UC Santa Barbara.”

Mead studied bidding consortia in auctions of federal timber land and oil in the 70s and 80s, according to Frech, and paved the path for research and legislation regarding the issue. Mead and Alexander both joined the department in the 1960s, and Alexander was named chair in 1965. According to a press release, Alexander went on to become the dean of the College of Letters & Sciences and the vice chancellor at UCSB. He finally created a specialty in managerial economics in the late 1970s.

“We named the chair for Alec Alexander to honor his major contributions as a chair of the economics department in a very different time, as well as for his services to the university as dean of the College of Letters & Science and as vice chancellor at UCSB,” said Walter Mead in a press release. “In addition, Thelma and I enjoyed traveling the world with Alec and his wife, Eleanore. Alec was a very best friend for many years.”