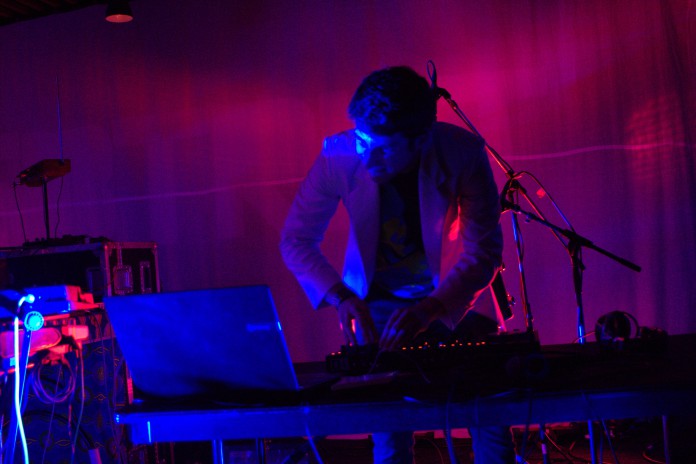 SBTRKT’s appearance at the Hub on Friday night was not your typical, packed concert experience. That is to say, plenty of tickets went unsold, and I was actually able to carry a conversation amidst the hordes of what would otherwise be noisy, deafening people. Regardless, the duo, comprised of drummer Aaron Jerome and keyboard/vocalist Sampha, proved to contribute something new to the artistic landscape: a sense of innovation.

Before I was able to dissect the quality of SBTRKT’s performance, I sat through opening act DJ Audio Pool’s 45-minute set. The disc jockey emerged at approximately 9:15 p.m. (the concert having been delayed due to a two and a half hour sound check on behalf of SBTRKT). Nevertheless, Audio Pool warmed up the crowd with some of his self-proclaimed personal favorites- Nero’s “Choices,” Netsky’s “Rise and Shine” and Sub Focus’ “World of Hurt.” ??

“Nero was a huge influence of mine,” said DJ Audio Pool to a growing, energetic crowd. “He’s part of the reason I’m here today mixing.”??

After a solid performance, he concluded by thanking fans and introducing SBTRKT.

The two-member group burst onto the London scene nearly four years ago. The two gained experience mixing and performing in the east London club Plastic People. Since then, SBTRKT has produced a series of singles, some EPs and a self-titled album. English stations BBC Radio 1 and BBC Radio 6 play SBTRKT’s music frequently. Although they are better known in the United Kingdom, the group has certainly garnered praise overseas as well. Fresh from their recent Coachella stint, the group seemed pumped to perform and to please the insatiable audience.

I’ll confess that I’m not a huge fan of much electro, techno or house music (anything basically heavily involving computer-made music), so I did not have exactly the highest expectations going into the show. Despite my musical biases, I was rather impressed by the group’s ability to combine different sounds and showcase them in an original manner. Throughout the show, I heard a countless amount of sounds. The electronic and acoustic drums, samples produced by the mixing desk, keyboards and vocal contributions from Sampha created a sound unlike one I had ever really heard before.

In addition to their technical skill, I was intrigued by their stage presence. When the two finally took the stage at 10:45 p.m., both members were wearing what appeared to be tribal masks. After conducting a little research on their costumes, I discovered that they represented contemporary interpretations of ceremonial masks from Native American societies that emphasize their desire to be anonymous. The group is highly insistent on maintaining a high level of anonymity, on and off-stage. SBTRKT refuses to do interviews, due to their wish to be evaluated strictly as a musical entity; doing interviews and talking to the press would take away from people’s perception of the music itself.

This desire to remain hidden was also apparent in the lighting change when they came out. While DJ Audio Pool played while submerged in a colorful display of red, blue and yellow lights, SBTRKT played the majority of their set in a much darker setting. For the most part, I could not identify their faces. They were only two dark shadows performing on stage.

During their hour-plus set, they performed several hits, including “Hold On,” “Wildfire” and “Heatwave.” With each subsequent number, the crowd grew in size and strength. In the audience, there was somewhat of a divide between die-hard fans, and those who just came to hear some entertaining live music. Nonetheless, it seemed as if most of the crowd exited the Hub quite satisfied.

SBTRKT should leave knowing they left a deep impression on some UCSB students, such as first-year global studies major Maggie Axelgard.

“I had a great time at the concert!” said Axelgard. “I went to Coachella last weekend and saw SBTRKT for the first time, so when it was announced they were coming to the Hub, I thought why not? It is refreshing to see such unique talent, no matter how many times.”