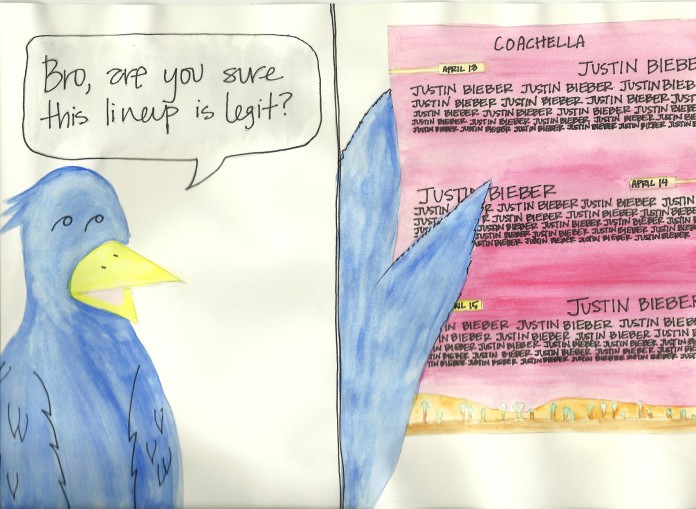 It seems that as soon as January rolls around, all that people can talk about is Coachella. Coachella this, Coachella that, blah blah blah. “Have you seen the lineup yet bro?” “Have you bought your tickets yet? Dude it’s gonna be epic!”

Don’t get me wrong, the concept of a three-day music festival in the desert sounds like an amazing time, but every year it seems like it is more and more impossible to actually go to Coachella. Between the insanely high ticket prices ($285), coupled with the fees (about $50) and the accommodations, even the bare minimum Coachella experience will cost you at least $400. Not to mention food, gas and other “festival supplies.”

Yet my dream of going to Coachella endures. For the past three years, I have been trying to go to this concert. But every year, something happens to deter me from going. Either I find out about the layaway program too late (when the hell was the secret layaway sale that took place in June announced?), or the tickets sell out as I’m stuck in Internet limbo, otherwise known as the “waiting queue.” But this year I decided it was going to be different. I Googled Coachella info incessantly, and for the past two weeks it’s been all I could talk about with my best friend that I was planning on going with.

We decided we would do the car camping (which is basically paying $90 just to sleep in your car), and decided on the first weekend as our festival weekend of choice. I made sure to save my ticket money way in advance, created my user account on Coachella.com and even enlisted my little sister to buy my tickets for me as I would be at work when they went on sale. But sure enough, the Coachella gods insured that I was not going to attend this year’s festivities. The website was so overloaded with eager ticket buyers that my sister couldn’t even load the website, and after about 30 minutes of trying to buy my ticket, she gave up. And of course, the tickets sold out in a few hours.

However, I can’t say that I was super disappointed. Coachella is one of those events like New Year’s Eve, which people are constantly over-hyping to the point of inevitable disappointment, as the event can never live up to its insane amount of hype. And not to mention that the lineup really was not that amazing. I had really only heard of a fraction of the bands, and when I did the math, paying $400 to see a few bands that I like was just not worth the one month’s rent the entire Coachella experience was going to cost me (although seeing Snoop Dogg and Dr. Dre was kind of enticing). But don’t write me off as a Coachella hater just yet. I know that I have to make it to Coachella one of these years, as it’s just one of those experiences that are essential to the formation of any twenty-something living in California. Here’s hoping I’ll finally make it to Coachella next year, as so far its Coachella 3, Lauren 0.