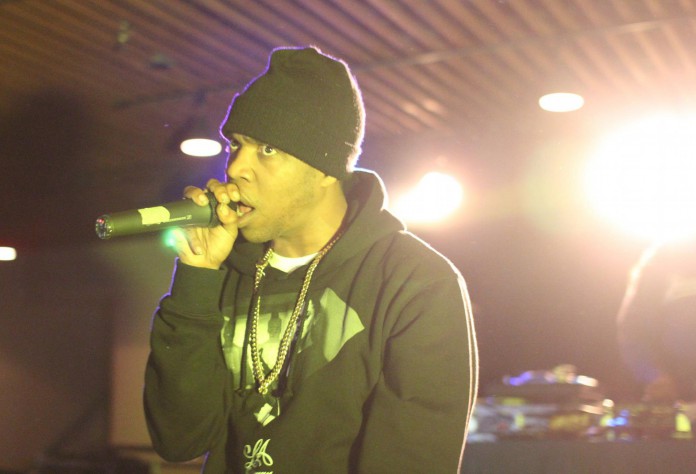 As the clock struck 8 p.m. Saturday night, fans slowly began to form a line outside of the University Center’s Hub, each hoping to grab a good spot before rappers Young Duse and Curren$y took the stage.

As the lights dimmed and the venue started to fill up, fans of the underground rapper flocked to get a glimpse of Curren$y as he kicked off his 60-minute set. The rapper, along with opening act Young Duse, had been booked by the Associated Students’ Program Board to perform Jan. 28.

Shante Franklin, better known as Curren$y, first stepped into the hip-hop game in 2002 as a member of the hip-hop group 504 Boyz. After working under No Limit Records for several years, he caught the attention of former classmate, Lil Wayne. After the New Orleans-based pair reunited, Curren$y signed with Young Money Entertainment. He released several songs while working with the label; however, due to lack of promotion, he decided do his own thing, and has since released several mixtapes, all which demonstrate his capabilities as one of New Orleans’ best underground talents.

The concert, scheduled to begin at eight thirty, actually began forty-five minutes later with a 30-minute set from Young Duse. Anticipation was building as his set continued; fans constantly scanned the stage, waiting for Curren$y to make his appearance. When he finally took the stage at 10:15 p.m., the crowd went wild.

Curren$y showed no lack of lyrical bravado, spitting out lines like “I’m bringing all my cars on the plane with me / Lor’ say the same / We gon’ make it and show our folks how to make them millions” while performing his first song of the evening, “Ventilation.” He continued next with the song “Smoke Break,” and progressed into his more recent hits by the end of the evening.

The show may not have sold out, as it had for previous better known acts such as Mac Miller and Steve Aoki, but that certainly did not undermine the quality of his performance. The amount of passion and energy he put into every verse exposed many to the raw, uncut talent of the underground hip-hop community.

As he left, Curren$y thanked Santa Barbara residents for their ongoing devotion and support. As the crowd slowly filed out of the venue once the show concluded, everyone had nothing but good things to say about the New Orleans talent.

“It definitely gave me a new-found appreciation for underground rap music,” said fourth-year environmental science major John Melhaff, who had been convinced by his housemates, avid Curren$y listeners, to attend the show.

For those who were already die-hard fans, their only complaint was that it was all over too soon. “If only the opening act has been a little shorter… Curren$y is a lyrical genius; he should’ve been up there for another hour!” said 20-year-old Santa Barbara local Caleb Richter.

The general consensus of the crowd on Curren$y’s talents?

“A solid performer. There’s no better way to say it,” said Richter.