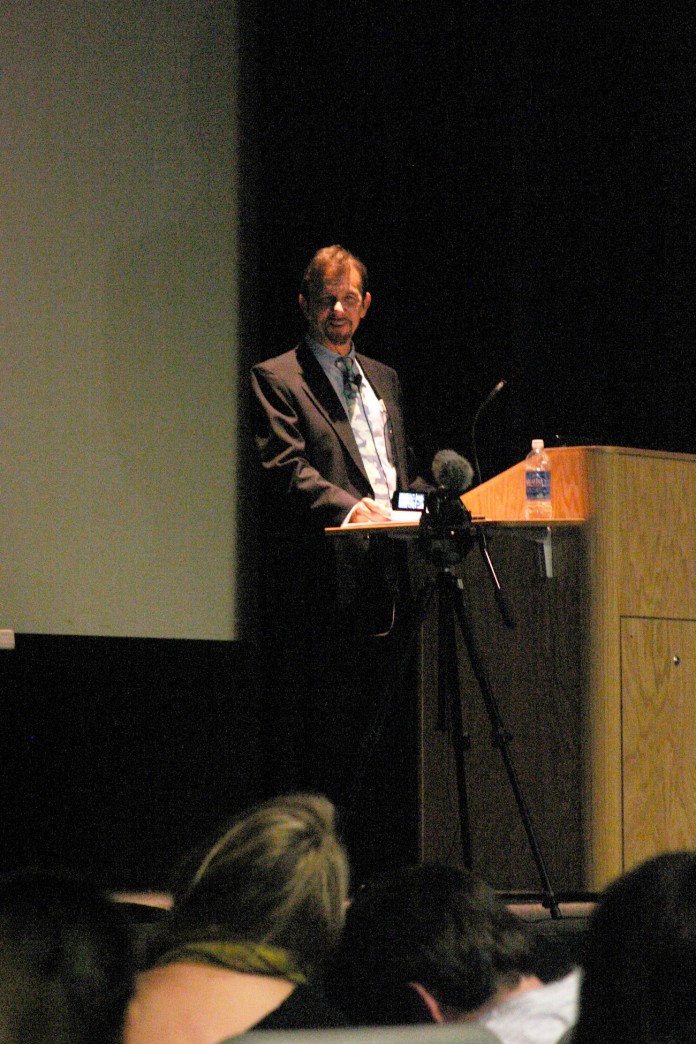 There were no set guidelines for the Last Lecture speech given by University of California Santa Barbara psychology professor Alan Fridlund beyond that it follows in the footsteps of the Last Lecture given by Carnegie Mellon University professor Randy Pausch less than a year before his death. The speech had potential to travel down nearly any path imaginable with such open possibility, but despite the vast options available, Professor Fridlund gave a moving speech with sincerity, humor and poise that brought several of the hundreds in attendance to tears.

The Associated Students Academic Affairs Board planned the Thursday night event for Embarcadero Hall, however, the 200 person occupancy turned out to be a gross underestimate. Students crowded the aisles, sat on the stage and even shared seats with friends. After seeing the audience, Amanda Berry, commissioner of academic affairs, had the event moved to the Isla Vista Theater, which, though capable of holding over 500 students, still necessitated turning people away.

“I’m blown away,” said Berry at the conclusion of the event. “I’m so shocked that this many people came out for our first event. I am proud of Dr. Fridlund for what he said and coming up with something; that was really hard.”

Standing before a crowd of over 500 college students, Fridlund offered his advice, beliefs and lessons from personal failures, with a sincerity and ease that brought the audience to stillness. After briefly stating confusion over what he should say, Fridlund began a speech that delved into very personal stories of his own life and those of that of his patients.

“Regard yourself as the prime mover of your own fate,” Fridlund said. “Occupy your life.”

Fridlund touched on the troubles of college students as they grow and face the world of competition for jobs and raises. He encouraged students to focus not only upon getting the perfect job, medal or recognition, but instead find fulfillment and enjoyment in the process of getting there.

“Times are tough. I’m guessing many of you are feeling the impact. Many of you are working multiple jobs or taking out big loans to help with your tuition,” said Fridlund. “But I am here to tell you that we have been in this place before and it will get better.”

Specific pieces of advice guided the speech. In regards of how to maneuver our lives, Fridlund suggests students “be vulnerable,” and understand that many people have no better idea of what they’re doing and feel just as isolated, alone and craving acceptance. He believes individuals must “make real connections” for friendship that extend to deeper talks and social interactions beyond the occasional text or Facebook message. Finally, he assured listeners that a fear of death gets easier to manage. As we grow older our fear of not doing enough, not being enough, or not having seen enough begins to abate and makes us appreciate the things we did do, those places we saw, and the talks we had.

“I hope this is not my last lecture, but if it is, I would want you to remember this night as one person’s attempt to help you navigate through your lives just a little more easily,” said Fridlund. “I tried to do it with care and concern and an optimism that you will add what you learn and that you will go on to live wonderful and fulfilling lives. And I hope that if one day you are called upon to give a Last Lecture that you will do the same for the generation that succeeds you.”