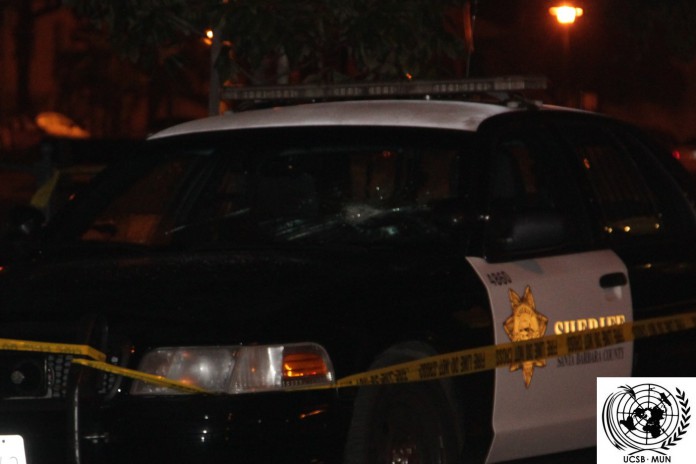 Shortly before 8 p.m., Isla Vista Foot Patrol was notified of an incendiary explosion occurring right outside the station’s front entrance, causing a broken windshield and superficial damage to a patrol car parked on the street.

Residents at 6505 Trigo Road called the IV Foot Patrol station after hearing a broken bottle smash outside, followed by flames residents say were over 10 feet high.
“We were all just standing in the kitchen when we heard a bottle break,” said Amy Sherell, a third-year psychology major. “Once we opened the front door and saw the flames, we closed it quickly and called the police.”

Sherell said they were unable to see anybody, though the way the bottle was thrown it looked like the bottle was aimed at the IV Foot Patrol vehicle.

“IVFP described the culprit as running up the bike path between Sabado Road and Trigo Road in a mask before throwing what is believed to be a Molotov cocktail,” said Taylor Davis, fourth-year English major who was interviewed by Isla Vista Foot Patrol earlier this evening.

South Coast Patrol Commander Laz Salinas said that the building was in no real danger.

“We don’t expect any leads or arrests tonight, we’re just initiating the investigation,” said Salinas. “We are however highly concerned, this is not an everyday occurrence.”
Salinas also said it’s difficult to determine how long the investigation will take at this time.

“This is a criminal investigation,” said Salinas. “We’re bringing in the [Santa Barbara] County Fire Department for forensics. As of now it’s arson-related.”

Isla Vista Foot Patrol officers are going door-to-door to residents living on Trigo Road and Sabado Road asking for any additional information or sightings of the culprit.

The Bottom Line will update as the investigation progresses.