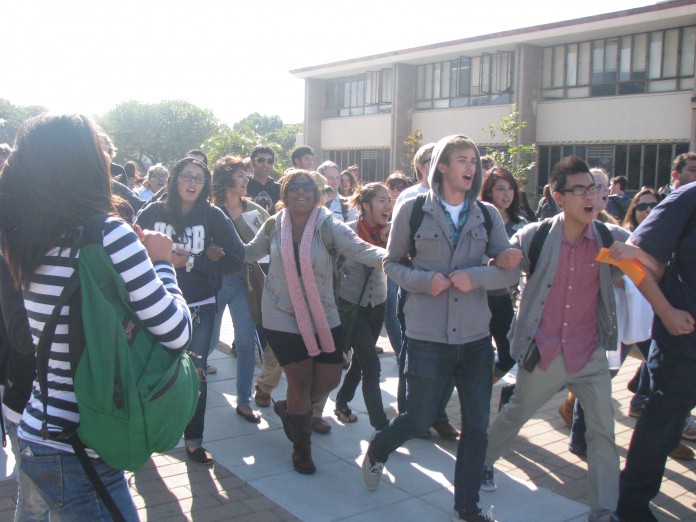 After opening chants and a group of speakers that included undergraduates, university workers and graduate students, protesters linked arms and marched together for a short walk to Cheadle Hall. In front of the building, rally members took turns sharing personal stories and experiences as students struggling to achieve a higher education. The crowd would repeat together each public statement the speaker shared, echoing their public sentiments.

“My dad is 69 years old and should retire, but he can’t because I’m here,” said Christina Ortiz, a third-year Chican@ and Spanish double major. “Where is the funding?”

Other undergraduates voiced similar concerns about their families struggling to pay for their higher education, forcing students to choose between receiving a college degree or helping their families’ finances by no longer having them pay for UC tuition.

“I have a lot of student loans out, and at the end of the year I have to decide if I will finish my education or help prevent my mom from foreclosing on our house,” said Reannan Last, a fourth-year psychology major. “I’m choosing to help my mom.”

Other students stated that although they may not be struggling as much financially as some, they are fully aware of the difficulties facing their friends and peers striving for a college degree.

“I personally have nothing to complain about,” said Stanley Tzankov, a fourth-year political science major. “But when I see student after student drop out, I begin to wonder when the stated ideals of this country will be met with reality.”

“If the police are here to protect us, why do I have to fear them attacking me?” said Orozco. “Police should protect its people, not murder them.”

Graduate student Brian Lovato, a Ph.D candidate in the Political Science department at UCSB, expressed his discontent regarding the high costs of graduate education and decreasing availability of employment for new professors.

“I was sold a lie and there are no hopes of employment after getting a Ph.D at a world class institution,” said Lovato.

Jose Gama, a fourth-year sociology major, had similar aspirations for becoming a teacher. However, due to the “privatization of higher education” his dreams of being a teacher have become “eroded.”

“I’m standing here with my peers and my voice is being amplified a 100 times over,” said Gama. “I will be heard, this is not hopeless.”

Many rally members, such as first-year socio-cultural anthropology and global studies double major Vanessa Ramos, stated that every human being had the right to an education, regardless of the current economic recession.

“Yes I’m poor, yes times are hard, I’m not asking for your sympathy,” said Ramos. “I’m not asking you, I’m telling you: give me my right to an education.”