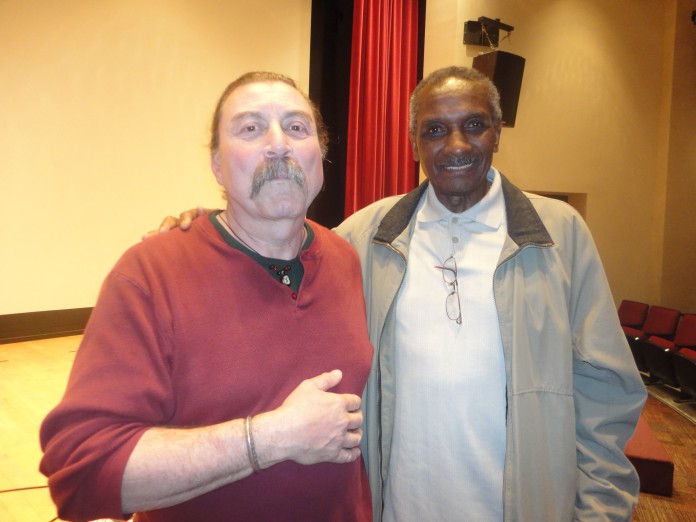 On Wednesday, May 18, the MultiCultural Center hosted a special screening of the Best Documentary of the 2011 North Carolina Black Film Festival, “Cointel Pro 101.”

From the first scene onwards, the audience is given court side seats to the 1950s-1970s setting, a time when the real-world games of self-determination and liberation movements were at their highest. With their attention strapped in on scenes of anti-Vietnam war protests and youth-led Black Panther Party speeches, the audience relives the torture and distrust sowed in by the not as well-known resistance program formed by the U.S. government in response to these status-quo-challenging undertakings, named aptly, Counter Intelligence Program 101.

Cointel Pro 101 was discovered by anti-war protesters that broke into a selective service office in Media, Pennsylvania on April 1971. Their initial goal was to search and destroy draft cards for the Vietnam War. Coincidentally, the selective service office shared their building with the FBI, and because of this, the protesters accidentally discovered the covert operations led by the FBI to internally penetrate and dismantle self-determination movements. They leaked these documents to the media and herewith began the dance of questioning pulls and denial pushes between the public and the U.S. government.

In a time when the internet has placed accessible yet still very hair-raising pieces of incriminating information on programs like those initiated by Blackwater, on the strategic interrogation tactics imposed on prisoners of war like those in Abu Ghraib,and on the Wikileaks-divulged American policies in the Middle East, the film goes on to portray a pounding truth in history repeating itself.

Kathleen Cleaver, a former BPP leader and now a Professor of Law at the Emory and the Yale Universities, said, “Cointel Pro, which was illegal then, mirrors the very legitimate policies today. You don’t even have to commit a crime to be arrested because of the Patriot Act. Now, it has [all] been legalized.”

In a post-screening Q&A, Director Claude Mark said, “Look into immigration policies and increased deportations under the Obama administration, Islamization and post 9/11 tactics…[it’s] interesting to see the forms that it takes today. [It’s] the legalization of what was harder to do years ago.”

Yes, Cointel Pro 101 was born and spearheaded in the 1950s by J. Edgar Hoover’s FBI to break progressive movements by minorities and indigenous peoples; but surprisingly, it’s first steps can be traced back to 1898’s government-initiated resistance against the then newly Spain-freed, Puerto Rico. Unavoidably, one can’t help but think — how long has the militarization of criminal justice really been going on? For a country that prides itself as the “land of the free” and the flag carrier of democracy, where is the justice and democracy in monitoring individuals, through wire taps and house break-ins, who were high in the “key agitator index?”

One FBI surveillance case, that made bile rise up my throat and burn my insides, was the case of the FBI paid leech, Rafael Marrero. In a move to gain the trust and love of the core group of Puerto Rican freedom fighters, Marrero married into a family that was comprised of many of the independence leaders and even fathered children with his wife.

Lucy Rodriguez, a former Puerto Rican independista and sister-in-law to Marrero, said, “As a spy, he leaked out [relevant] information against the people who considered him as family. I saw my family torn apart, and the children had to, unfortunately, suffer the most.”

From acts against the Puerto Rican nationalist movements to the mass murder in the 1973-1976 Reign of Terror in the Pine Ridge Native American Reserve to the unclaimed bombings in Boulder, Colorado on Chicano rights leaders and to the L.A. Swat Team’s attacks on the BPP offices, visually “Cointel Pro 101” succeeds to illustrate the powerful message behind the US government’s order to “neutralize” these supposed threats to national security.

“Our arrests didn’t just represent the destabilization of American Indian movements, but it was a sign. …The state wants to show the costs of going against the government,” says Leonard Peltier, an incarcerated activist and member of the American Indian Movement.

High school teacher, Matef Harmachis said, “I know only of three Goleta high school teachers who teach Cointel Pro in their History classes. The state has made a real, conscious effort to separate the spirit of the movements from our youth.”

“We need to really work to raise our kids to be independent thinkers…to know the difference between truth and lies,” she said.