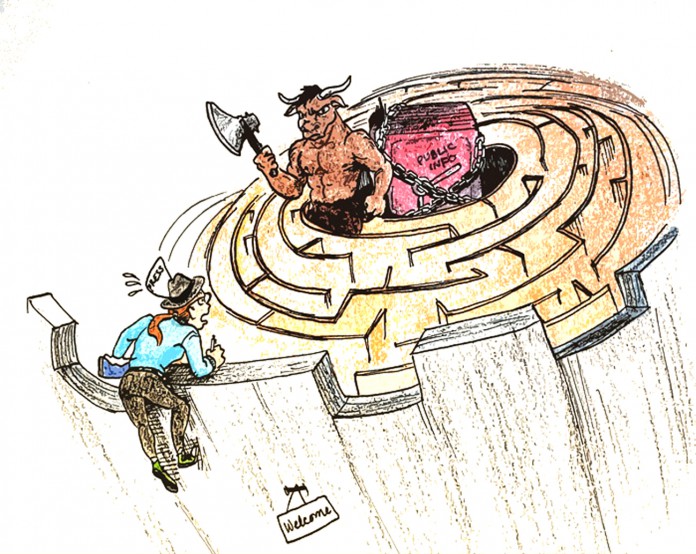 When I decided to spend my spring quarter embarking on a journey through the political wonderland that is UCSB’s Associated Students, I really had no idea how far down the rabbit hole I would go. Several weeks of legal contracts, unresolved scandals and board interviews later, I find myself infinitely more informed, but just as hungry for information as I was at the beginning.

I started by asking the easiest questions first: what is Associated Students and how much power do they really have?

Jake Elwood, internal vice president for the 2010-2011 school year said “A.S. is just the department that fills in all the gaps the university leaves out.”

While that may be overly-simplified, the full response involves reading the 215-page Legal Code on their website. As far as the amount of power A.S. has, they control over $10 million each year generated mainly through student lock-in fees.

Then I started to wonder, who exactly controls this money every year?

Harrison Weber, A.S. President for 2011-2012 added, “Every student that pays student fees is technically a member.”

Call me a rebel, but if I’m paying $159.96 a quarter for things like concerts and the Bike Shop, I sure as hell want to know when the people who spend my money mess up.

I heard about a “potential misappropriation of fraud involving an employee within the organization” according to the annual financial review A.S. receives every year. Conducted by the accounting company Nasif, Hicks, Harris & Co., LLP, the review details all auditing of financial statements from the Legislative Council for the year ended June 30, 2010.

According to Marisela Marquez, A.S. Executive Director, it was reported in the wrong direction.

“The auditors did not discover this and bring it to us, we brought it to the auditors,” said Marquez.

She said the individual has been identified as a full-time employee, and is now under criminal investigation.

Okay, maybe I’ll let it slide if the information that got out was merely poorly-worded, but then I got wind of the villa scandal of last year. From Jan. 8 through Jan. 10, 2010, 19 Legislative Council members and one staff member went on a retreat to Villa Antonio in Los Osos. When the owner accused the Council of leaving carpet stains, a broken ceiling light and wall piece, vomit in the garden and eight empty alcoholic beverages, sparks flew. Students were outraged over $2,850 of their own funds were being used for a retreat littered with debauchery. A Facebook group entitled “Hold Associated Students accountable for their actions!!!” even sprung up, boasting 1,724 members.

Nearly 16 months later, and there’s no news about how the whole affair ended. And no one seems to be asking questions. What’s the point of wanting to start a revolution if no one even wants to know where their contempt ended up?

“It was resolved appropriately or to the satisfaction of both parties…it was never taken to court,” said Marquez.

After being unable to contact University Attorney Nancy Hamill, I am left only to wonder what might have been. The fact that it’s taken me nearly eight weeks to hunt down the person who holds the key to the villa scandal chest to no avail, is slightly ridiculous. I understand this is a high-profile matter here, but any UCSB student should be able to know what repercussions were made after allegations of misused funds.

As if these two scandals weren’t enough, two more have sprung up like weeds. Allegations arose about eight current and six former A.S. members serving alcohol to minors during spring elections (Villa Incident 2.0?).

Open People’s Party elected Representatives-at-large Kelly Gandee and Chelsea Parrott, and Off-campus reps Lauren Begleiter and Alexa Cover weren’t sworn in and all others face resignation, serving with mandatory community service or without honoraria as OPP pushes to appeal. But the icing on the cake came when Joseph Lee, re-elected as Rep-at-large, was asked to resign after pleading not guilty to charges of grand theft, felony burglary, unauthorized altering of computer data system and receiving stolen property. Lee stepped down last week citing “idiotic political pressure.” Despite this sounding like a bad soap opera, I do commend A.S. for taking the time to investigate the alcohol-ridden election and for challenging Lee; this shows they are taking this all seriously and recognize something has to be done.

Ultimately what this really all comes down to is transparency.

“We’re always trying to better the services we provide, so we would like students to meet us halfway,” said Paul Monge-Rodriguez, A.S. president for 2010-2011.

While I agree students must let their opinions be known if they want change, waiting for others to hunt down office and meeting hours to ask about alleged fraud or scandal is unacceptable. Just because the information may be controversial doesn’t mean a student, or writer, needs to spend weeks searching through documents and contacting executives in order to get answers that beat around the bush.

I admit A.S. is making legitimate efforts. The recent elections left A.S. with the approval they needed to change the name of the Legislative Council to the Senate, as well as the restructuring of the entire group which is supposedly to lead to more efficiency and transparency.

In the end, it’s our right to know where our money goes and we should be able to trust the people who control it. By the way, I’d still love to know what happened with the villa incident.