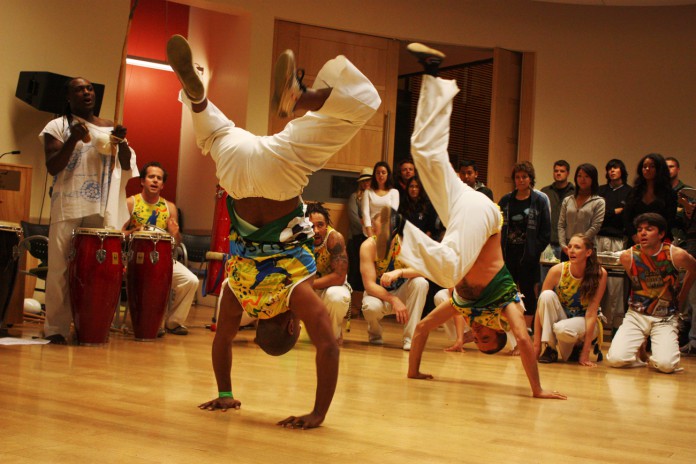 The Rhythms of Brazil Culture Club held a celebratory culture night in commemoration of the Afro-Brazilian liberation leader, Zumbi dos Palmares, on Sunday, November 7. The group relived the memory and works of Dos Palmares through dance and musical performances.

Rhythms of Brazil was created last year by a group of UCSB students and community members who were eager to immerse themselves in Brazilian arts. The group has connections with Batuque Santa Barbara and the Brazilian Cultural Arts Club in Goleta.  Their group aims to bring Afro-Brazilian culture to the campus community, and they do this by showcasing rich Brazilian culture through artistic dances and musical pieces.

Vika Stansky, president of the Rhythms of Brazil Culture Club and Global Studies graduate student said, “With this event, we hope to honor that November 20 is Day of Black Consciousness in Brazil. We want [to] tell people that you don’t have to be Afro-Brazilian to be part of this struggle and to want to come together in solidarity for this cause.”

The band Borderlands began setting the event’s mood with a lively set of songs and instrumentals reminiscent of Latin American melodies intertwined with African pulsating sounds. The group’s sultry harmonies pulled many people out of their chairs and onto the dance floor. Women were swaying their hips to the percussion and men were grooving along with similarly alluring drumbeats.

Shortly afterward, the group began an elaborate and synchronized display of various Brazilian dances that had roots in the cultures brought to Brazil by African slaves. The historic dances performed included Capoeira, Samba, Maculelê, Afro-Brazilian Dance and dance rituals that sprang from the indigenous religion of Candomble that were set to summon various deities with each different drum beat.

Mathurin Somé, an Economics graduate student from West Africa, said, “The cultural night reminds me of my own culture—from the beats to their dances. The fact that through the arts they are uniting people, [is] very impressive.”

The set of dances displayed not only the dancers’ skillful movements and it also showed how much fun dancers were having.

During the Capoeira performance, a martial arts-dance originally practiced by African slaves, dancers focused playful eye-smiles on their supposed foes while simultaneously dodging their opponent’s graceful kicks. The energy manifested in every intricate sway and calculated swing of the dancers got the crowd cheering and clapping with each new dance that was presented.

“[A part of the] Brazilian culture was brought in with the slave ships. Those slaves had almost nothing to call for themselves,” said Robin Tesda, a member of Rhythms of Brazil. “This amazing spirit of triumph comes from the fact that they’ve been able to hold on to these dances.”

The night finished with musical rhythms played by Rhythm of Brazil’s Banda Batucada. “Batucada” are musical reggae-like beats and percussion played with native Brazilian instruments that have harmonies originating from fast-paced African harmonies.

In step with how they started, event-goers matched up their own energies with that of the performers and went to the floor to groove the night away.

Rhythm of Brazil meets in the African Diasporic Resource Center at the SRB every Thursday 12-1PM.