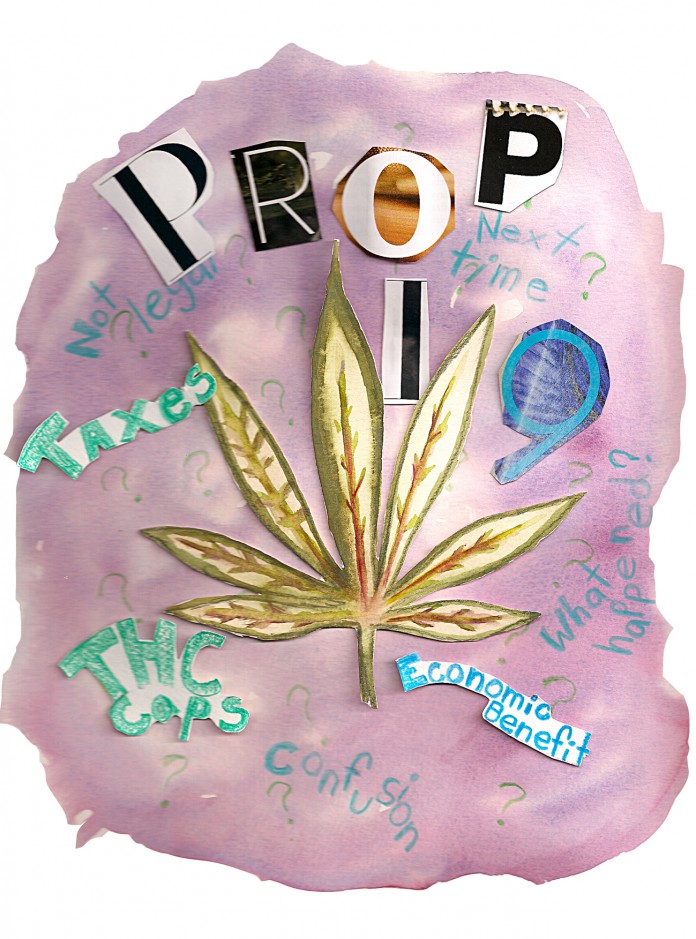 What happened to you, California? You used to be cool! First, you play hot potato with gay marriage and now you reject an opportunity to be the first state to legalize the sale of recreational marijuana? Have you been hanging out with Texas?

I guess it’s time for me to face facts. Proposition 19 was rejected and I’m left to wallow in disappointment.

Not that I had any real stake in the outcome of the proposition. I am not a fan of marijuana as a recreational pastime and haven’t been since a handful of weed-induced paranoia that I had back in high school.

For me, Prop 19 was more an intriguing spectacle than anything else. I was a casual observer entertained by the idea that there was a chance I would witness a significant benchmark in the evolution of our cultural and political attitudes about a once taboo substance.

But to say that Prop 19’s failure has sealed the deal on the marijuana debate is just silly because this whole process has lifted marijuana to a better position for future legalization.

In my lifetime, the legalization of marijuana has grown from a pipedream (pun intended) to being a serious topic of political contention. What reason is there to think this increasingly lenient attitude regarding marijuana will stop any time soon? Prop 19’s rejection should not be looked at as a failure, but rather as a temporary setback.

Or better yet, consider the rejection as a learning experience for its campaign spearheads. The flaws in the initiative’s campaign are well known. With the voting results as close as they were, it’s more than likely that simple improvements to a second campaign in 2012 would yield a different outcome.

One of the crucial weaknesses of the measure was its vague write-up that gave opponents room to criticize. For example, a major premise of the initiative was that marijuana would be taxed. Voters like UCSB American Politics graduate student Emiliana Patlan supported the initiative for this potential economic benefit.

“I think it’s better to control it and tax it then for it to just be illegal. It’s comparable to alcohol prohibition-people are going to do it anyways. We might as well reap what benefits we can,” said Patlan.

But critics were quick to point out the initiative’s vague plans were unable to guarantee that revenue could be made. The poorly written initiative also hurt itself by generating confusion among potential supporters.

UCSB third-year Political Science major Lily Sepahpur had heard various conflicting rumors about the actual content of the proposition, which led her to be unsure of how she would vote until the very last second.

“I ended up voting yes, but I was worried because I’d heard they might put some kind of cap on the THC levels, so I almost voted no,” said Sepaphur.

How many “no” votes were caused by this lack of clarity? Other voters like UCSB fourth-year Art History major John Lee were unsure if the initiative would really change anything at all.

“Even if it did pass, wouldn’t you still have the federal government to worry about? It’s like the laws now only matter if you’re stupid enough to get caught anyways, so what difference does it make if it’s legal from a smoker’s perspective?” Lee said.

Prop 19 left many questions  unanswered, but proponents are looking to fix previous mistakes. The main man behind the initiative, Richard Lee, has  expressed plans to draft a new version of it for 2012, this time taking input from Prop 19’s critics into consideration.

With a corrected write-up of the proposition, 2012 could be the year that California voters  tip the scale in favor of marijuana legalization, transforming California into a “hip” trendsetter for other states to follow.